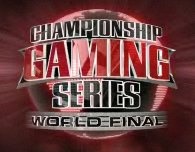 The winner will receive the first-ever World Champion title awarded by the Championship Gaming Series, and it carries a $1 million purse.

The playoffs, which will take place in Los Angeles, feature top teams from around the world. The games they’ll be competing with are Counter-Strike and FIFA 2007 on the PC, and Dead or Alive 4 and Project Gotham Racing 3 on the Xbox 360.

The World Final will also feature the Itagaki Challenge. DOA creator Tomonobu Itagaki will preside over this “battle of the sexes,” as top world DOA players Vanessa Arteago and Ryan “OffBeatNinja” Ward go head to head. The winner will receive a ceremonial Katana and a trip to Toyko.

The events will be aired starting on December 6 at 10:00 p.m. EST. The full CGS World Final event schedule is as follows:

More information can be found on the CGS website.