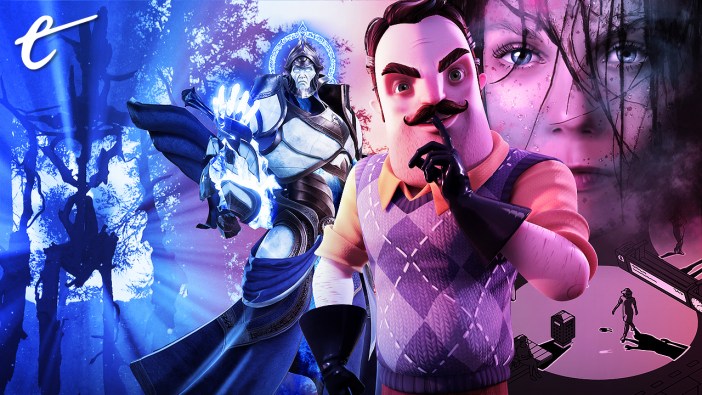 Welcome back for another rummage in the toybox of upcoming indie games. It feels a little like Halloween has come a month late, as horror heads up this edition, but we’ve got some cutesy platforming, competitive strategizing, and cathartic hunting further out. So come along with us and get the details about upcoming and future indie games Hello Neighbor 2, Burnhouse Lane, SCHiM, Immortal: Gates of Pyre, and The Axis Unseen.

Since Hello Neighbor first creeped us out five years ago, publisher tinyBuild has expanded the “family-friendly horror” brand in all sorts of ways. There’s a prequel, a VR spinoff, a multiplayer spinoff, a construction game, and now — finally — a full-blown sequel.

Hello Neighbor 2 scales everything up from the original. This time, you’re a journalist trying to uncover the truth behind a series of disappearances in the quaint town of Raven Brooks. While Mr. Peterson, the mustachioed menace of many a nightmare, returns, he’s joined by an equally unsettling lineup of suspects. Likewise, the sandbox is bigger, and you’ll be canvassing an entire neighborhood in your investigation, observing the houses and characters and interacting with the world around you.

Even with the expanded scope and renewed focus on investigative elements, Hello Neighbor 2 hasn’t lost sight of what made the original so compelling. The self-learning AI reminiscent of Alien: Isolation is back, improved, and applied to each of the neighbors. As you push the boundaries and try new tricks, they will respond to ensure you never feel entirely safe or in control of the experience. If you’re in the mood for a horror game that delivers on both the tension and the jump-scares over the holidays, look no further.

If, on the other hand, you’re after some psychological horror, maybe Burnhouse Lane will tickle your fancy. It’s the newest project from Harvester Games, which previously made The Cat Lady, a narrative-horror game with powerful themes that has attracted a cult following in the decade since release. Burnhouse Lane seems like it picks up everything that made that earlier game (and its follow-ups) so beloved, while adding in some new niggles.

After a suicide attempt, something promises Angie Weather that she will be healed if she can complete five tasks. You take on the role of Angie and set out through an exploration of the human psyche brought to life with a bevy of horrific imagery. The developer’s pedigree with point-and-click adventure gameplay is well established, and Burnhouse Lane adds some light survival horror-style gunplay to the mix. There’s also a stronger focus on a branching narrative this time around, and hopefully that takes nothing away from the potency of the storytelling.

The unique visual style won’t be for everyone, and we can safely assume a certain level of jank in the production. However, Harvester’s previous games are an indication that, if you’re willing and able to look past those difficulties, you’re almost guaranteed a very special experience. If you can stomach it, that is.

Okay, time to lighten things up a bit. SCHiM has been making waves on indie game Twitter for a while now, no doubt thanks to its minimalistic look and evident focus on fun. In it, you’re a Schim — a soul that’s been separated from its body, and you have to find your way back by jumping from shadow to shadow. Lead developer Ewoud van der Werf told us that this core traversal idea was inspired by Splatoon’s swimming in ink mechanic.

The game began as an exam project for van der Werf, and the positive reception to it meant that he has kept working on it since graduating. The central ideas of SCHiM have never shifted across that time. “I’ve been very keen on not featuring UI elements or complicated mechanics that I felt could spoil the gameplay for a broad audience,” he said. However, “there have been, of course, new additions to the gameplay, such as the shadow interact (interacting with the objects in the game, this blog goes deeper into that), collectables, and story elements.”

As for the visual style, simplicity was always front of mind: The simple color palette of each level is “mainly” because van der Werf is colorblind, while “Ligne Claire (the art style pioneered by the creator of Tintin, and Joost Swarte) became much more of an inspiration for the line art.” The decisions paid off because the eye-catching aesthetic ensures SCHiM has the most memorable presentation from just about any lineup.

Meanwhile, SunSpear Games is making a play for the competitive RTS crown with Immortal: Gates of Pyre. It’s an ambitious goal, but the team has the passion to match it, with members having created mods and other tools for StarCraft II as well as being involved in the development of Skywind.

Like the best strategy games, Immortal: Gates of Pyre is built around simple principles. You first scout the terrain, then engage in the inevitable back-and-forth of attacking your enemies and expanding and defending your territories. Meanwhile, you’ll be collecting resources to build armies and power special abilities. Where the game differs from many of its contemporaries is in the inclusion of Immortals, which you select at the beginning of a battle. Each Immortal transforms two unit types into stronger versions and grants access to unique skills as a way of tailoring your play style.

That player-led approach is guiding the team through development, with the ultimate aim being for Immortal: Gates of Pyre to hit that sweet spot of being accessible enough for everyone yet deep enough for pro players to sink their teeth into. With no fewer than five factions planned for the final game, multiplayer support for up to 3v3 battles, and plans for long-term support, the game has the potential to be a mainstay of competitions in the years to come. For now though, it remains in pre-alpha, with rigorous testing to create an effective foundation.

The Axis Unseen is another story of a game made by a developer striking out on their own after leaving a major studio. In this case, the dev is Nate Purkeypile, former lead artist on Fallout 76, with senior credits on Bethesda games stretching back to Fallout 3. That background is strongly felt in the look of his new project, but it definitely doesn’t stick to the Bethesda formula. Instead, The Axis Unseen is an open-world game that’s laser-focused on one thing: hunting. Your prey are the beasts of mythology, many of which are more than ready to turn the tables.

Don’t make the mistake of thinking it’s much like Monster Hunter, though: “When I very first heard the term ‘Monster Hunter,’ I thought it would be something a lot more deliberate and more like a hunting game,” said Purkeypile. “Monster Hunter is great, but it’s definitely more action-oriented and grindy. The Axis Unseen is more about actually hunting monsters, following their tracks, paying attention to the wind direction, and getting the perfect shot. It’s closer to the way something like theHunter: Call of the Wild plays. Only instead of spooking a deer and having it run off, it’s a giant monster that will come and eat your face as heavy metal kicks off.”

To ensure the soundtrack goes as hard as the gameplay, he’s brought on board Clifford Meyer from metal bands Isis and Red Sparowes to act as composer. To bring it all together, The Axis Unseen supposes that all of humanity’s myths come from the same point of origin — and drops you into that world to unravel its mysteries. It’s an enthralling concept and development seems to be going well, so hopefully we’ll have it in our hands sooner rather than later.

Let us know what you think of the selection of indie games this time around and what you’re most interested in among Hello Neighbor 2, Burnhouse Lane, SCHiM, Immortal: Gates of Pyre, and The Axis Unseen.