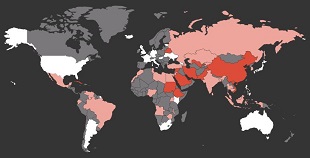 Despite the recent debate over net neutrality, the United States has it pretty good.

Net neutrality has been one of the hot-button domestic issues in the United States this year, and for good reason. An Internet potentially controlled by corporations with little government involvement is something that affects us all, for better or for worse.

But how does the rest of the world handle Internet censorship? The United States might be on the brink of net neutrality dying as a practice, but we’re hardly on the “oppressed” end of the spectrum.

IVPN, a company that specializes in Internet connectivity encryption, just released an interactive map that shows how bad some Internet-connected countries really have it.

IVPN’s data is not 100 percent complete — Canada is oddly absent from the data collection, as is Northern Europe. North Korea is also missing, but that’s because the nation has an extremely limited intranet network, and not a public Internet connection to the outside world.

Of the countries included, China is one of the worst offenders, as it checks boxes in eight of the nine monitored categories.

Most of the data used in the map comes from Freedom House’s 2013 “Freedom on the Net” report.