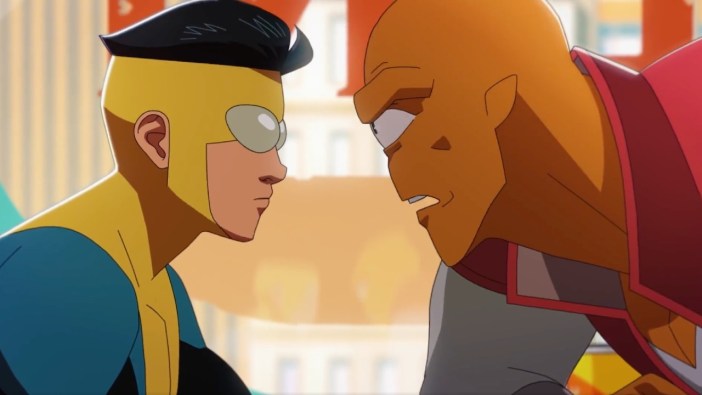 Amazon Prime Video has released the Invincible season 2 teaser trailer nearly two long years after the shocking end of the first season. It also gave us a clue as to when the next season of the animated superhero drama will start airing.

The trailer takes place sometime after the events of the first season, showing Invincible (aka Mark Grayson, voiced by Steven Yeun) and Allen the Alien (voiced by Seth Rogen) having lunch at Burger Mart, where Mark used to work, to discuss where they have been since they last saw each other. The fourth-wall breaks come in when Allen asks Invincible, “What have you been up to? It’s been a while. I think everyone agrees it’s been, like, a little ridiculous how long it’s been.”

“I’ve been busy,” the teenage superhero replies, “writing, designing, storyboarding, voice acting, key posing, in-betweening, cleaning up, color slapping, comping the whole thing, and all that for, you know, roughly thousands of shots. So, it’s kind of a lot.”

Welcome to Burger Mart! Please enjoy a hot meal along with an update on Season 2 of… pic.twitter.com/rHTblkb2wp

Allen then presses Invincible for information on when season 2 will come out, considering it’s been over a year and a half since the last one aired. He gave the official release window as late 2023, which could be anywhere between October and December.

Invincible, based on the comic book of the same name by The Walking Dead creator Robert Kirkman, achieved such high critical acclaim and social media popularity in 2021 due to its faithfulness to the original source material and its uniquely adult take on the superhero genre. Amazon renewed the show for a second and third season shortly before the eighth episode of the first season aired on its streaming platform.