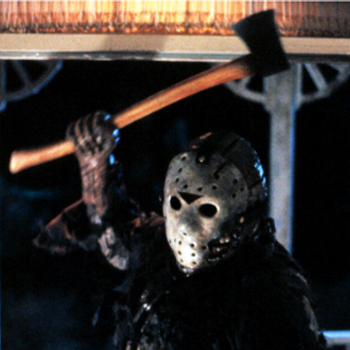 “He’s back. The man behind the mask.”
— Alice Cooper

2013/14’s weirdest unexpected TV trend? Longform dramas based around popular horror movie characters. We’ve already seen series based around Hannibal Lecter, Norman Bates, Dracula and even The Headless Horseman thus far; and now the king of the 1980s teen-slashers is following them to the small screen: Jason Voorhees will return in a new hourlong series based on Friday the 13th.

Mainly (but not exclusively) focused on a succession of multiple-murders occuring at Camp Crystal Lake, the Friday franchise debuted in 1980. Jason, however, did not become the main character until the sequel and didn’t take his iconic form – an invincible, emotionless, unstoppable murder-machine in a hockey mask – until Part 3. He later became a full-fledged zombie in Part 6: Jason Lives and a cyborg in the future-set Jason X.

The series will reportedly take it’s cue from mystery/mythology series like Sleepy Hollow or American Horror Story, and will be set in a contemporary Crystal Lake where the unexpected reappearance of Jason leads characters to delve into the dark history of the Voorhees Family and the town itself. It has not been revealed whether or how the series will “fit” with the continuity of the original series or the largely forgotten one-off reboot of the franchise from 2009. A previous TV series from 1987 was related to the films in name only, and did not feature Jason.