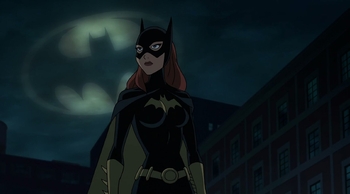 Does this make up for The Killing Joke?

Despite being one of the most popular characters in the DC Comics canon, Batgirl has never previously gotten her own movie. We saw her first (movie-wise) in the super-duper and amazingly fantastic live-action film Batman & Robin, in which she was played by Alicia Silverstone, and she’s appeared in many of the animated movies and TV series (both live-action and animated), but never as the star in a big-budget live-action movie.

As first reported by Variety, a yet-untitled film starring Batgirl is in the works from Warner Bros., set to be part of the DC Extended Universe.

The kicker? It’s going to be written and directed by none other than Joss Whedon.

Whedon, of course, has already directed two Avengers movies for Disney and Marvel. He previously made a name for himself on television, creating series like Buffy the Vampire Slayer, Firefly, and Dollhouse. He had previously shown interest in directing a solo Black Widow film for Disney, but after officially leaving the Marvel Cinematic Universe, it appears that he looked elsewhere to direct a female-led superhero movie.

There is not currently any information regarding a star or even a scheduled release date.

The next movie in the DCEU is Wonder Woman, which is scheduled to hit theaters on June 2, 2017.