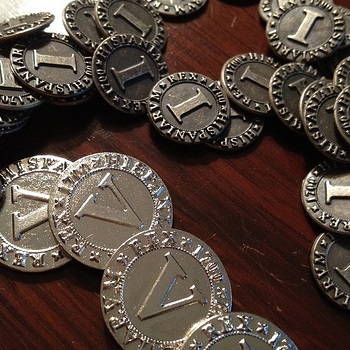 Conquistador Games asks backers to change their pledges after the highest reward levels were cut by Kickstarter.

Kickstarter backers with deep pockets, take note! With less than 48 hours left in its ‘The Best Damn Coins’ campaign, Kickstarter notified Conquistador Games that its highest reward tiers fell outside terms of use. Today, all pledges above the $100 reward level were deleted, leaving Conquistador Games to ask its most generous backers to pledge at the lower levels.

The campaign aims to produce a series of Greek themed metal gaming coins, in five different finishes and sizes. It overtook its initial $5000 goal early and has raced through stretch goals toward additional themed coin sets, such as Egyptian, Mythological Creatures, and Viking. Each set contains an impressive 51 coins, and many backers opted for 30 or more sets. The trouble came from a Kickstarter limit on bulk quantities of rewards at no more of ten of a single item. Backers can still over-pledge and receive additional sets, but the misstep could have cost them nearly $50,000 in raised funds had their backers not responded quickly.

The decision appears to be part of the standard 48 hour review policy at Kickstarter. In a comment regarding the decision, Conquistador Games said, “We take no issue with it. It is clear that how we structured the rewards is the problem, not the idea of people buying new and additional coins that we make. Lesson learned.” Conquistador Games has run three other successful Kickstarter campaigns for tabletop games, with similar metal gaming coins included as a backer reward. It just goes to show you even a company with a good Kickstarter history can stumble.

‘The Best Damn Coins’ Kickstarter ends September 11, 11:59 pm EDT, so if you’re eager to get your hands on some good looking metal gaming coins you’ve still got time. If you want to fill a bathtub with them, however, you’ll have to do some creative over-pledging.

World of Warcraft Revenues Down 54 Percent