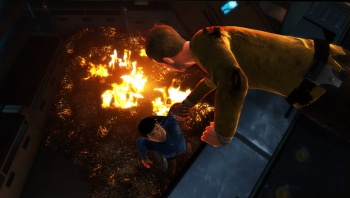 Swashbuckling, space-faring, womanizing Captain James Tiberius Kirk has taught us a lot over the years, but perhaps his most important lesson was how to synthesize gunpowder from simple ingredients you could find on any ordinary deathtrap battlefield. In the original series episode Arena, the dauntless captain defeats a Gorn – a member of a cunning reptilian race – in single combat. In Namco Bandai’s upcoming Star Trek video game, Captain Kirk and loyal companion Mr. Spock will do battle with an entire fleet of the lizard men. Furthermore, since the iconic duo brooks no imitators, Chris Pine and Zachary Quinto will reprise their roles as the roguish Starfleet officer and his green-blooded friend.

Over the course of the cooperative action game, Kirk and Spock will utilize a variety of tools and weapons to do battle with a variety of Gorn adversaries, including multitudinous Rushers, stock Warriors, and imposing brutes. “Great villains give our favorite characters a chance to become heroes in the process of attempting to eliminate a powerful threat,” says Carlson Choi, a marketing VP at Namco Bandai. “This is one of those moments and we couldn’t be more excited to give gamers a glimpse at the challenges that lie ahead for Kirk and Spock.” In addition to raw strength and a bloodthirsty demeanor, the Gorn will use more subtle tactics, such as poison and hallucination to thwart the two protagonists.

While Kirk and Spock will be the only playable characters, they are not the only cast members returning to bridge the videogame gap between 2009’s Star Trek and its upcoming sequel. Zoe Saldana, Karl Urban, Anton Yelchin, John Cho, and Simon Pegg will step into the stylish, futuristic boots of Uhura, McCoy, Chekhov, Sulu, and Scotty, respectively. The exact details of the story have yet to emerge, but as usual, it will be up to the crew of the Enterprise to save the galaxy from an emergent threat to galactic peace and stability.

There’s no point in beating around the bush: Star Trek games have an extremely checkered past, with the wheat:chaff ratio sitting somewhere around 1:2. Movie tie-in games don’t usually fare much better. That said, with the whole main cast of the movie returning and a story that looks to expand on the existing lore rather than just rehash it, there’s no need to send it through a one-way portal to the Mirror universe just yet.