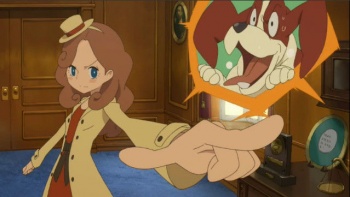 Level-5 has confirmed that Lady Layton will see a western release in 2017.

Professor Layton fans were pleased to hear the news that the newest game in the series, Lady Layton, would be released in Japan next year. At the time, a western release was, as is always the case with Japanese titles, uncertain, but now Level-5 has confirmed that the game will see an English language release.

Lady Layton: The Millionaire Ariadone’s Conspiracy – the game’s official English title – will launch in western territories in “2017”. No further time-frame was provided. The Japanese launch is currently slated for “spring” 2017, so we can assume it will be in the later half of the year.

“The story will focus less on dynamic problem-solving and more on solving multiple mystery cases observed in the everyday lives of Londoners,” Level-5 says, with hopes it will offer “a faster tempo and more comical tone” that fans will find “funnier than ever” while “maintaining an adventurous quality.”

The game star’s the titular Professor Layton’s daughter, Katrielle “Kat” Layton, and will be released on both Nintendo 3DS and iOS/android devices.