If you follow my work at all beyond this column, then you’re probably already sick of hearing about how much I like the new Tomb Raider game. Regardless of how well it works as a Tomb Raider title, I found it fun and interesting. But you didn’t click through just to hear me gush about a game. (Although if you’re looking for a review, Susan’s got you covered.) So let’s talk about one of the small number of things I didn’t like. Let’s talk about Samantha.

There’s no way to discuss this without talking spoilers. Or we could, but it would require such vague language that the thing would be hard to follow and useless for the point I’m trying to make. So rather than beat around the bush, let’s just go into full-on spoiler mode, beginning with the very next paragraph.

The problem in this game is Samantha, one of several of Lara’s friends who end up shipwrecked with her on the island. Sam is our damsel in distress in this game. Not only does she fit the trope, but she’s also a clueless, spineless, whimpering burden. She gets captured and re-captured during the course of the game, and a majority of your playing time is spent trying to find or rescue her. Sam is a wet sack of a character, a burden to be dragged around by the two sides.

Sam gets captured the first time by basically following a very sketchy dude away from the camp for no explained reason. Later she calls for help on the radio, and unlike your other friends she’s sniveling and terrified. The bad guys try to burn her at the stake. It doesn’t work out, but when you finally rescue her it takes her about half a minute to blunder off into a different fire and get separated from you. Later your friends are all united and holding off waves of bad guys. Everyone is mowing down the bad guys except for Sam, who is unarmed and flapping her arms in a useless panic.

Some people didn’t like all the guttural grunting and gasping Lara did in her struggle to survive, but for my money Sam was the queen of annoying vocals. She spent pretty much the whole game crying, whining, and screaming for other people to save her. In fact, the only time she doesn’t cry and scream is when it would actually help her. She’s captured twice, and both times it’s from among friends without bothering to say anything or let them know she’s leaving or in trouble.

After her second capture, Lara tracks her down again. This time Sam is following the bad guy up the side of a mountain. She’s got some ceremonial robes on, and she’s just walking along beside him to her doom. Sure, he’s got a spear, but he’s obviously planning to kill her once they get to the top and he’s barely even pointing it her. She was screaming at Lara for help, and at the same time I was shouting back at my screen, “Sure thing, lady, but in the meantime STOP FOLLOWING HIM.” Lara is getting torn apart trying to catch up with Sam. Yet Sam is willing to slip into a nice sacrificial robe and hike up a mountain with the bad guy even though it would really help her cause if she would struggle a little.

At the end, Sam ends up on her knees, about to be sacrificed. Her hands are tied, but there’s nothing stopping her from just standing up and walking her dumb ass away from this crazy altar where an ancient spirit is about to steal her body. Sure, the bad guy is there with his goofy spear, but if Sam had a brain in her head she ought to have figured out that the bad guy needs her alive for the ceremony, so he’s probably not going to run her through. All she has to do is stand up and run around a bit. Again, Sam doesn’t seem willing to make any kind of effort on her own behalf, even though sitting there like a lemon is obviously going to lead to a horrible death. 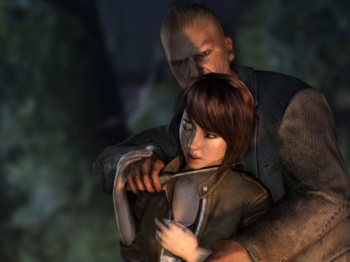 The only time Sam stops being so helpful is after she’s rescued. Once the bad guys are all dead, Sam passes out so that exhausted, wounded, battle-weary Lara must carry healthy, unharmed Sam down the mountain.

This lack of will, foresight, and intelligence might be okay if Sam was a child or an animal or a helpless person. But Sam is young and fit. Every other friend of Lara’s gets a chance to prove themselves and either fight heroically or die honorably. Everyone else can fight, or fix things, or has useful knowledge. At the end, everyone is fighting to save useless Sam except for Sam.

It’s not just that Sam seems to be perpetually helpless, she’s also an empty shell of a person. Her life revolves around Lara, and the only thing she ever talks about is how awesome Lara is and how wonderful it is to be with her. She doesn’t seem to have much else going on in her life. Her reason for taking the voyage in the first place is because she’s the only one who believes that Lara is right about a certain theory. Sam even wants to make a documentary about Lara. Even Sam’s connection to the story – the whole reason the bad guy wants to sacrifice her – is the result of her bloodline and not related to anything she’s done. Sam is completely passive and life just happens to her.

Over the years a lot of people have complained about this “Damsel in Distress” idea. This is particularly true of women, who jump into a game hoping for a fun power fantasy and too often find the only woman in the game is some helpless bimbo with no sense of ingenuity or initiative. After a while this can really start to grate and eventually we find ourselves arguing about how sexist a character trope is. Some people will defend this game by pointing out that the ultimate badass of the story is Lara, with the idea being that it’s okay for Sam to be stupid and weak because Lara is resourceful and strong.

But before we unleash the kraken of gender politics, it’s important to remember that Samantha’s problem isn’t that she’s a weak woman. Samantha’s problem is that she is a horrible character. She only exists to stroke the protagonist’s ego between rescues. She has no important dialog, she needs to have everything explained to her, she doesn’t get any funny lines, and despite being in almost constant peril she doesn’t seem to go through any kind of character arc. She’s shallow, she’s annoying, and the story would be better if she was just replaced with an inanimate object for the two sides to fight over.

Yes, far too many times the inept doormat character that we have to rescue ends up being a woman. But making Samantha into Samuel and having Lara rescue a spineless whiny dude wouldn’t fix the problem that the person we’re trying to save is the least interesting person in the game. Let’s not argue over how sexist this character is. Let’s get rid of it and replace it with something better.

To fix Samantha, just give her some strength, skill, and determination. It’s okay if our rescue buddy can’t liberate themselves. I don’t begrudge a character not being able to free himself or herself from an army of cultists. Just show that they’re trying. Make them good at something besides fighting. Make them a character with thoughts of their own. If nothing else, give them some witty things to say. We don’t need to enact some kind of perverse affirmative action quota where we make sure both genders are properly represented among terrible sidekicks. Let’s stop having terrible sidekicks.

Shamus Young is a programmer, a novelist, and he really loved Tomb Raider despite Samantha.