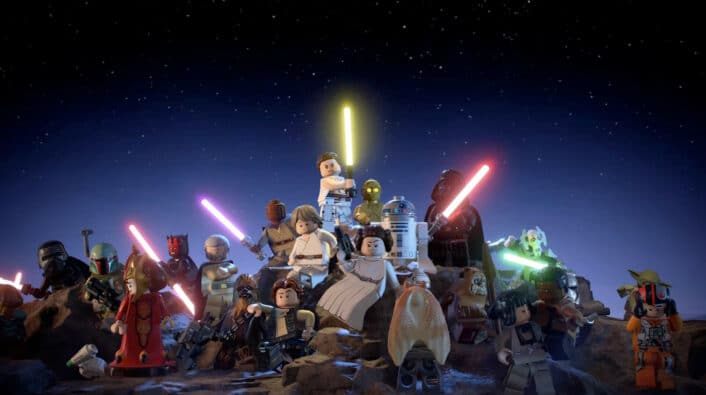 Developer TT Games has finally locked in a new release date for Lego Star Wars: The Skywalker Saga of April 5, 2022 on PC, Nintendo Switch, PlayStation 4, PlayStation 5, Xbox One, and Xbox Series X | S. Preorders are open for Lego Star Wars: The Skywalker Saga on PC and consoles now via the game’s website, and a new gameplay overview video is here to entice you to do that.

The video does a good job of showing off a peek of all of the characters and locations players will be able to visit, all while maintaining that trademark TT charm. See galactic space battles, puzzles, and Lego lightsabers in the six-minute Lego Star Wars: The Skywalker Saga gameplay overview trailer below.

TT positioned Lego Star Wars: The Skywalker Saga as the ultimate Star Wars celebration when it unveiled it in 2019, and the new gameplay overview video emphasizes that. Every entry in the mainline film series has been completely reimagined in Lego form, bringing revamped combat mechanics and controls across the board. For starters, you can expect more traditional third-person, over-the-shoulder shooting controls. Lightsaber duels even look to be on par with what was seen in Respawn Entertainment’s Star Wars Jedi: Fallen Order. There is a roster of more than 300 characters to unlock and play as in total.

The Escapist saw a hands-off demo of Lego Star Wars: The Skywalker Saga shortly after its reveal at E3 2019. At the time, TT planned to launch its ambitious project the following year. Of course, that didn’t happen. Delays eventually pushed the release date to 2021, but the real worry began to set in when TT delayed Lego Star Wars: The Skywalker Saga indefinitely last April.

Meanwhile, according to reporting from Polygon, the wait may not have been worth it. Developers at TT have reportedly been subject to intense periods of crunch and a poor working atmosphere for more than a decade. Even as the studio has continued work on its latest outing, it has lost at least 40 staff members in the last year alone. So, while it’s nice to finally see a date on the horizon, it may not have been worth it.