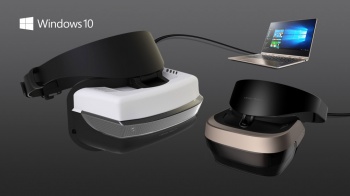 Microsoft has officially revealed its horse in the VR headset race.

While everyone else was getting excited over VR, Microsoft showed us something a little different: The Hololens. It now appears that the lens was only the first stage in the company’s bid to enter the VR race, as at today’s Surface event, Microsoft has revealed that it has partnered with several PC manufacturers to create affordable VR headsets for Windows 10.

The partnership includes companies such as Lenovo, Dell, ASUS, HP and Acer, and that the headsets they create will start at the $300 mark. They will be compatible with Windows 10 – specifically as a part of the forthcoming Creators Update that was also announced today as part of a larger push to bring 3D designing and scanning capabilities to the masses.

We don’t have too much info on these headsets as of yet, but Microsoft has stated that they will be the “first and only [VR headsets] with inside-out” tracking sensors.

This seems like a really good fit for Project Scorpio, and could act as a direct competitor to Sony’s recently released PlayStation VR.

Either way, more VR headsets on the marketplace is always a good thing. Nothing like healthy competition to keep companies in check!