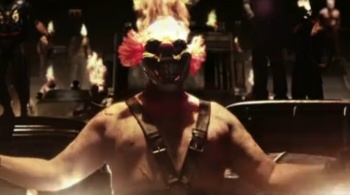 11:55 Ladies and gentlemen, take your seats. How many games can you squeeze into a single trailer? A lot, apparently.

Jack Tretton, president and CEO, is intimidated but comes on out anyway. There is no need for tarps. Ten months of year over year growth is impressive. PS3 is the only console with something for everyone, from BluRay to networking to games, including many exclusives.

12:01 Kazuo Hirai, President and group CEO of Sony Computer Entertainment takes the stage. Says Sony is the undisputed leader of 3D. What the PS did for BluRay, it is ready to do for 3D. Where’s my 3D TV, Kazuo?

12:05 Killzone 3! Made with full 3D in mind! We’re getting two demos from the game! Exclamations abound! Oh my! It looks phenomenal. The shootout in the first sequence was great, but the jetpack action was insane. After that, we get a little gunship sequence. Can this game look any better? Way to set the tone, Sony. The game’s due out next February, so you won’t have long to wait. Oh, and it also works with Move. We’re going to play this ourselves later at the show.

12:12 More trailers for the upcoming 3D games including The Fight, Crysis 2, Gran Turismo 5, Motor Storm and plenty of others.

12:20 Sorcery takes the stage. This Harry Potter style game gives players a chance to use the Move as a magic wand to fire off spells, and even drink potions. Can create whirlwinds and steer them around. You can even lay down lines of fire and send your whirlwind through it to make a firestorm. It’s a great way to show off the PS Move.

12:31 Now it’s time to talk sports. EA’s Andrew Wilson comes out to talk about Tiger Woods PGA Tour 11. Motion control makes loads of sense in a golf game, so it makes sense to show that in a demo. Really shows off the one-to-one movement. Not about flicking your wrist; now it’s about making a real golf swing. Available as a PSN update later this year.

12:37 Heroes on the Move (working title) is up next. It uses many of Sony’s best known characters. Ratchet, Jak, Sly, Bently, Clank and Daxter join up for an epic showdown powered by Move.

12:40 Partnership with Coca Cola, which is apparently a positive brand.

12:41 Oh my! Ken is here to focus on what really matters – the games. Who’s with me? Gaming is a ridiculously large TV in a one bedroom apartment. It’s staying up till 3am for a trophy that isn’t real…but is.

Kevin really whips up the crowd and shows how in touch Sony is with the hardcore culture. Gaming is king and is for everyone is the clear message here, and it’s a convincing one.

12:53 The new PSP ad campaign is introduced. You can check it out at marcuspsp.com.

A new PSP version of God of War, Ghosts of Sparta, is shown in a trailer. More than 70 new PSP games are coming by September, from Invizimals to Kingdom Hearts to Ace Combat to DragonBall Z. There are also new entries in the Fat Princess, Madden, and Tetris brands due out.

1:01 Next up is some praise for PSN, the industry’s most connected network with 50 million connected users. More news bits: The Tester Season 2 casting starts today, and you can even check out a version of the Sony booth on Home.

1:03 Little Big Planet’s creation and sharing tools is positioned next to ModNation Racers’ user generated content as a step forward for Sony. As interesting as that is, the demo of Little Big Planet 2 is the real story here. They want to make LBP a real platform for creating unique games. The demo shows off a few unique creations, from simple button matching games to bumper cars to low-gravity rocket combat games.

1:10 Sony is still committed to a free-to-play model for PSN, but also want to introduce premium content with PlayStation Plus, a subscription service that allows access to exclusive content. It will start later this month at $49.99 a year or $7.99 a month.

1:14 EA is up next to talk about the partnership between the two companies and show off exclusive content for the PS3. First up is Medal of Honor. Though the game is moving into the future, the tenets of authenticity and respect will remain the same. A new character is revealed for the game. More importantly, on June 28 the tier one operators who have been consulting for the game will appear in a series of online interviews. Medal of Honor’s also showing off a new map in the Diwagal Valley of Afghanistan. The action looks hot. You can check it out yourself when the beta launches on June 21. The PS exclusive will include a remastered version of Frontline.

1:20 Now we finally get to Deadspace 2. Isaac Clark’s been in deep sh…uh, space for a while now so it’s nice to get back to the action. The demo, while technically impressive, raises the more important question of what happens when you crap your pants in a skin tight suit of armor? Of course, there’s a Sony exclusive here as well, including Extraction with PS Move.

1:24 Stand by for an important announcement from Aperture Science! Gabe Newell from Valve comes out on stage and makes a quick joke about his past comments on controllers. Portal 2 is coming to the PS3 and Steam will be part of the experience. It’s coming September 2011

1:33 Where was Tron? Where was DC Universe Online? Call of Duty? They’re finally shown in a montage trailer.

1:37 Next up is Gran Turismo 5. There are no words to describe how amazing this game looks. The fact that it’s coming out on November 2 makes it that much sweeter. I can’t wait to see it in full 3D.

1:39 Infamous 2. The hits just keep on coming. The powers and action here are very appealing, but we’ll have to wait until 2011 to get our hands on the final.

1:41 One last surprise before we go and it’s a good one. Twisted Metal is back, complete with an on-stage ice-cream truck driven by Sweet Tooth. Twisted Metal is the longest running series in PlayStation history. Now it’s finally coming to PS3 in 2011. The developers showed off some online gameplay from team deathmatch mode. The game seems exciting, but the demo requires a little imagination from the viewer to see just how cool it could be. We’ll have a chance to play this one at the show too, so look for more impressions later.