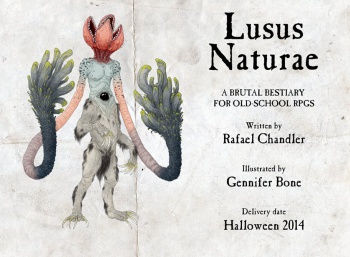 Lusus Nature translates to “freaks of nature” and… yeah. Its got those.

You know, sometimes I think that the monsters in tabletop fantasy games just aren’t scary anymore. They’re just too safe for work Beholders are fearsome, sure, but they’re just ravenous beasties in the end. They don’t inspire fear in dungeon crawling player characters. Apparently game writer and designer Rafael Chandler agrees with me. Hence, his Kickstarter for the Lusus Naturae, a bestiary for old school RPGs like the first few editions of Dungeons & Dragons, Lamentations of the Flame Princess, or Adventurer Conqueror King System. Chandler’s primary inspiration are the kinds of oddly specific horrors that exist in folklore, demonology, and the covers of death metal albums. “[These monsters] derive strength from fear, they nurture hate, and they reshape human flesh. Bereft of conscience, these entities inspire torture, manipulate time, and establish new religions in lightless ocean depths,” he says. Further, Chandler is drawing on his Peruvian heritage for his monsters – using inspiration for new horrors that certainly haven’t appeared in the distinctly western-slanted traditional D&D bestiaries you’re used to.

I’ve taken a look at some of Chandler’s previous efforts in this vein, and they deliver on the kinds of gore-fueled terror that he’s promising. Trust me when I say that these are monsters in every sense of the word.

Infinite Crisis Enters Open Beta And Gets A New Trailer