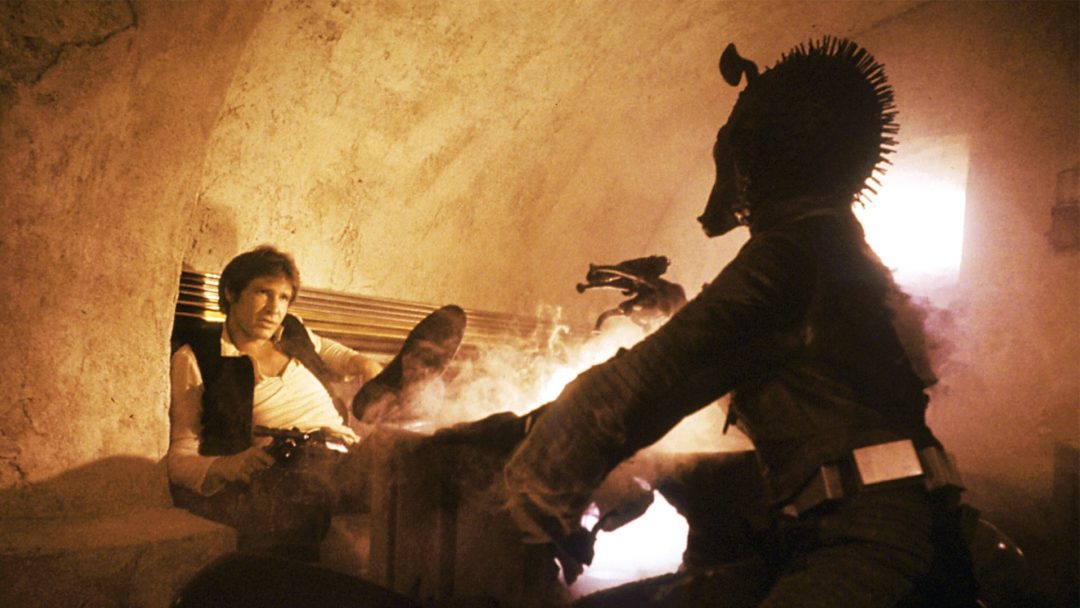 There is no controversy more controversial in the Star Wars universe than whether or not Han shot first, but for early Disney+ subscribers who logged in today to watch Star Wars: Episode IV – A New Hope in glorious streaming 4K, it got even more confusing. The famous scene between Han Solo and Greedo, in which the latter is gunned down by the former, has once again been edited, and the culprit was once again George Lucas. The change involves a new word… “MACLUNKEY!”

In the Disney+ version of Star Wars Greedo now shouts "MACLUNKEY" before getting shot. This is now my favorite version because why the hell not? MACLUNKEY! #starwars #maclunkey pic.twitter.com/k1XmP8wAZT

As you can see, in this newest version of the scene it is nearly impossible to tell what is going on at all. First Greedo shouts “MACLUNKEY!” for no apparent reason and without the courtesy to subtitle himself. Then he fires and there’s an explosion that seems to be attempting to mask a terrible cut into Greedo falling over dead. It’s hard to see Han even firing because of how quick the cuts are. Frame-by-frame analysis shows they now fire on the same frame, a change in the timing from Lucas’ previous edits. Whatever the end result, it’s a serious mess of editing and a long shot from the original clip, where Han simply shot the guy and then we got to see aliens not caring.

This edit evidently took place just before Disney acquired Lucasfilm, but no one has noticed because Disney hasn’t done a re-release of this 4K version up until now. Maybe it was just one more middle finger from Lucas, who just can’t seem to keep his hands off his own work unless he’s sold it to a giant corporation who owns all the rights and won’t let him touch it anymore.

These aren’t the only changes Disney has made to older content on their service. For instance, The Simpsons‘ older episodes are being streamed in widescreen, and that means that part of the original picture is being cut off. It isn’t that big a deal until it starts ruining visual gags like the one below.

All the classic Simpsons episodes on Disney+ are in cropped widescreen format — this means you miss out on tons of great visual jokes, like how Duff, Duff Lite and Duff Dry all come from the same tube. pic.twitter.com/cTy9adulFl

There are probably more changes out there that folks will discover as they dig through the massive archive of Disney and Fox content that lives on Disney+, but most likely none will be as odd or as memeable as MACLUNKEY.