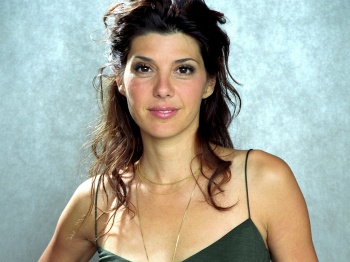 If reports are true, The Wrestler and Empire‘s Marisa Tomei will be Aunt May in the latest Spider-Man film.

Next to Uncle Ben, Aunt May is one of the most important figures in any Spider-Man movie. This is the woman who raises Peter Parker after his parents are killed, teaches him right from wrong, and maintains a strong presence across Spider-Man’s entire career. That means casting May is just as crucial as the hero himself. And if Variety’s sources are correct, that role has just been filled by Academy AWard-winning actress Marisa Tomei.

It’s worth noting this information has yet to be confirmed by Marvel Studios or Sony Pictures, although a statement may arrive later at San Diego Comic Con. Some fans might find Tomei’s casting an unusual choice, since she’s much younger than Aunt May is typically portrayed. But to be fair, people are technically saying the same thing bout Tom Holland as Peter Parker – Marvel and Sony could just be starting this reboot at earlier points in these character’s lives.

If this casting report is true, it should be very promising – and not just because of Tomei’s impressive acting abilities. Rosemary Harris already portrayed a grandmotherly Aunt May perfectly ten years ago with Sam Raimi’s Spider-Man, followed by Sally Field in the reboot. Making Aunt May a younger woman fits the “Spider-Man in high school” approach Marvel is aiming for, while helping its writers avoid the same ground covered by two previous franchises.

Regardless, we’ll have to wait for official word before we know for sure. As it stands, only Spider-Man‘s star and director were revealed as of last month.