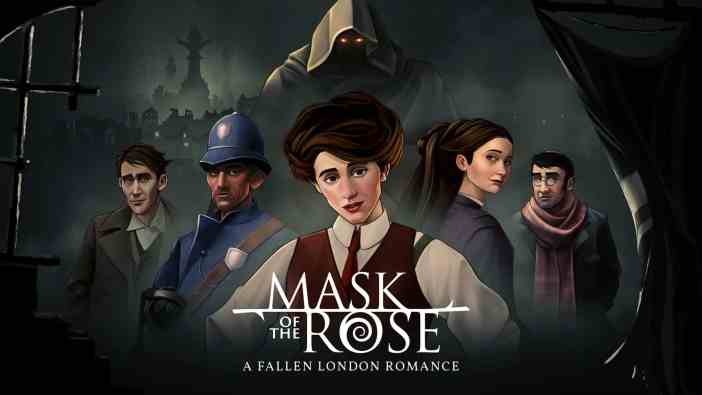 Mask of the Rose: A Fallen London Romance is a romantic visual novel set in an established universe created by developer Failbetter Games. The film-noir Victorian adventure was announced today by the creators of Fallen London, a text-based browser game, and is set in the same universe. The studio’s other literary RPGs, Sunless Sea and Sunless Skies, also occur in the same world, with Mask of the Rose establishing a backdrop as a prequel to the entire series. See the game’s announcement trailer below.

Mask of the Rose takes place in 1862, almost immediately after London falls in Failbetter’s twisted world.

“There’s no sunlight,” Creative Director Emily Short said. “Not all of your new neighbors are human. Parliament is underwater, and the mysterious Masters of the Bazaar are now in charge.”

She continued, “The story is about how you all adjust to a world that works differently from everything you’re used to – and the friendships and romances you form while there.”

Art Director Paul Arendt said that Mask of the Rose is an “evolution of the Fallen London universe’s painterly art style” that retains its atmosphere, thanks to detailed characters and environments as well as new visual effects.

Newcomers will be able to jump into Mask of the Rose without any prior knowledge of the series or visual novels, but of course, some details and secrets will resonate with veterans. The developer will be launching a Kickstarter for Mask of the Rose in February 2021 with plans to release the game in 2022, so expect more details early next year.

The London-based studio says that Mask of the Rose is the first of two games it has in development, teasing that it will feature mechanics that are “very different” from past Failbetter titles. Other than that, fans will have to wait for more details about what’s coming next.