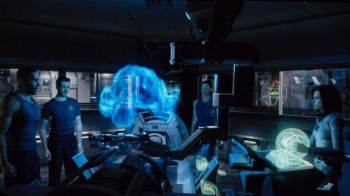 The look and feel of BioWare’s Mass Effect universe may have drawn heavily from Square Enix’s Final Fantasy series – but not the ones you’re probably thinking of.

Squaresoft’s 2001 CGI film Final Fantasy: The Spirits Within was an ambitious attempt at creating an epic sci-fi adventure that stayed true to the spirit of the beloved videogame series. It was also a tremendous financial flop that was too videogame-y for mainstream audiences, and not enough like Final Fantasy for Final Fantasy fans. I mean, Square even had the gall to name a character “Sid” instead of “Cid” – of all the nerve!

The movie’s failure might have cost Square a metric ton of money and delayed the eventual merger with Enix – who was understandably unsure whether it wanted to merge with a company that had just lost a metric ton of money – but its legacy lives on today in a surprising successor. Speaking with Xbox World 360 magazine, Mass Effect 3 art director Derek Watts said that he and his team looked at the Final Fantasy film for inspiration.

“Yeah, you know we actually reference a lot from Final Fantasy: The Spirits Within. We used a lot of their GUIs and the way they did their ship – that was kind of like in some of the early designs for the Normandy,” he said.

“Our attack helicopters are loosely based off that movie. There’s some great stuff, especially their glowing GUI screens; we used those a lot. I keep a folder of that stuff and I still actually tell the guys ‘just go back and look at that. Change it like that!'”

It’s slightly amusing to think that one of the most infamous videogame box office busts of all time could inspire one of the most successful game series in recent memory, but the world is strange like that. At least Mass Effect isn’t taking cues from Van Damme’s Street Fighter.