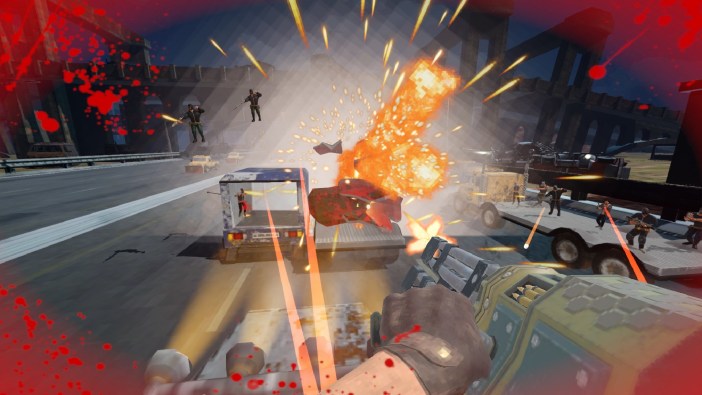 Fans of games like Metal Hellsinger, Doom, and Clustertruck are familiar with nonstop action and constant movement. Now, an independent developer has taken his love of those games, combined it with a clear appreciation for ’80s action movies, thrown it all in a blender, and named the product Meatgrinder — and the game has already gone viral on Reddit.

Mike Polgosha has spent the past 12 months working on Meatgrinder after deciding to create a “boomer shooter” that captures the essence of old-school FPS games like Doom or Duke Nukem and delivers it with a vibe that screams Mad Max or The Matrix. The product of that mashup, now in demo stage on Steam, is getting players’ attention.

This isn’t like other games where it’s just good strategy to keep moving at all times. In Meatgrinder, you either keep moving, or you die. That’s because your heart has been replaced with an engine that is powered only by your legs. Movement keeps your heart rate up and heals you, but a low heart rate will kill you, so be careful about stopping for too long.

That all sounds dangerous enough, but there are also waves of enemies trying to kill you that you have to fend off with weapons and abilities, all while traversing freeways, moving trains, and more. The influence of a film like The Matrix really showed on the freeway level, which brought back a lot of memories of a key sequence in The Matrix Reloaded.

Meatgrinder is in the demo stage on Steam, and it’s not a finished product, which shows through in several bugs and graphics that are a callback to old FPS games but don’t feel quite finished. Still, Polgosha is actively seeking feedback from players on this chaotic creation, and gamers who try Meatgrinder can leave their thoughts on Reddit along with what they’d like to see from a game like this.

Meatgrinder is due out on 2023 on Steam.