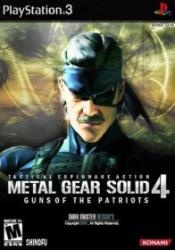 Big-budget games can cost between $10-$50 million to produce, according to IDC analyst Billy Pidgeon, meaning anything short of major sales success can result in a financial loss. “You might be able to weather one title coming in at 500,000 in sales,” he said. “But two or three failures like that and even big publishers are going to be hurting.”

Most publishers attempt to produce games for as many consoles as possible in order to widen their potential market, but Metal Gear Solid 4 is a PlayStation 3 exclusive, presenting it with an even greater challenge to succeed. The comparatively low adoption rate of the console has resulted in a limited market for the game, and thus far only two PlayStation 3 games have reach the one million unit sales mark since the console’s release.

There is also concern that Metal Gear Solid 4 may not have the Halo 3-like impact needed to significantly alter the fortunes of the PlayStation 3. Adam Sessler of the G4 network said, “Metal Gear Solid 4 isn’t the killer app. People who already own a PS3 will likely get it. But it doesn’t have that kind of broad-based appeal.”