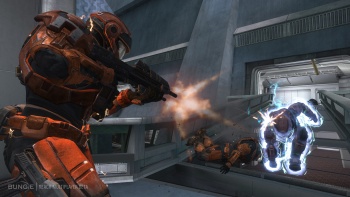 An online listing for Halo: Reach costing more than a thousand dollars has been explained by Microsoft as for “journalists only”.

If you’ve browsed the Xbox 360 Games on Demand recently, you might have noticed a listing for Halo: Reach with a cost ever so slightly under one hundred thousand Microsoft Points. That rather large price tag translates into around $1250 in real-world money, which most would agree is rather a lot, even for a game as highly anticipated as Reach.

But Microsoft has said that it’s not something that gamers should concern themselves with, as they won’t be expected to pay that high price, and indeed, won’t be able to. That listing, Microsoft says, is purely for distributing review copies of the game to journalists. Microsoft said it was thrilled to be able to take advantage of the Games on Demand service for this purpose, but that the listing shouldn’t be taken as an indication that the game will be distributed over Xbox Live. Presumably, the high price is to dissuade people from trying to buy it, only to find that they’re not allowed to. I’d be willing to bet more than a few have tried to buy it just to see what happened though.

It’s kind of a shame that Microsoft doesn’t release new games on the Games on Demand service, although Reach will almost certainly feature on the service in the future. Halo Reach is released – sadly, just on disc – on September 14th.