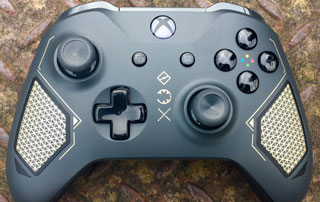 There’s a new Xbox One controller coming next month, and it’s got a decided military flavor.

There are plenty of Xbox One controllers out there, but Microsoft isn’t done rolling out options. The company announced today that it will be releasing a new, military-inspired controller next month. Dubbed the Recon Tech Special Edition Controller was “inspired by military technology and performance patterns, exploring concepts stemming from combat armor and sci-fi mechanical gear,” Microsoft’s Major Nelson wrote on his blog.

The controller was shown off on Twitter by Xbox Social Marketing Manager Graeme Boyd, who posted images seen below. He also highlighted the “Laser-etched grips on the front and rubberized grips on the back.” The controller also boats an improved wireless range and Bluetooth support.

If you’d like to get your hands on one of these controllers, the wait won’t be long. It’s due to release on April 25 with a retail price of $69.99.