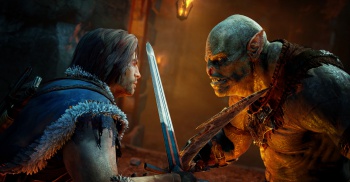 Middle-Earth: Shadow of Mordor‘s impressive Nemesis system might need to get slimmed down if the game’s going to come to last-gen consoles.

We’ve seen a lot of cool stuff in the previews for Monolith’s sandbox assassination game, Middle-Earth: Shadow of Mordor. The game’s overarching structure is shaped by its unique Nemesis system, which simulates Sauron’s entire procedurally-generated chain of command. It’s a fascinating idea that turns organic gameplay decisions into mission-spanning objectives – and if you want to experience it, you’d better have a current-generation console. It’s apparently too much for last-gen platforms to handle.

“We’re very focused on the PS4 and Xbox One,” says design director Michael de Plater. Features are designed for those systems first, and while most of them can be safely ported to older hardware (albeit not quite as pretty-looking), some of it will have to be cut out. “The story will be the same and the core gameplay will be the same, but [the Nemesis system] is just so huge in terms of content, calculations and AI we’ll just have to try and get as much of it in as we can.”

So, on the up-side, PS3 and Xbox 360 players still get to be a Middle-Earth assassin and use all the same climbing and combat techniques, but their enemies won’t react as intelligently to the player’s personal campaign. It’s interesting – the Nemesis system is certainly advanced, especially considering the scope of the game’s open world, but last-gen consoles were still plenty powerful. You would think that there would be other systems that could be ditched instead of the game’s most attention-grabbing innovation.

Middle-Earth: Shadow of Mordor is headed for the PS4, Xbox One, PS3, Xbox 360, and (let’s not forget) PC sometime this year.