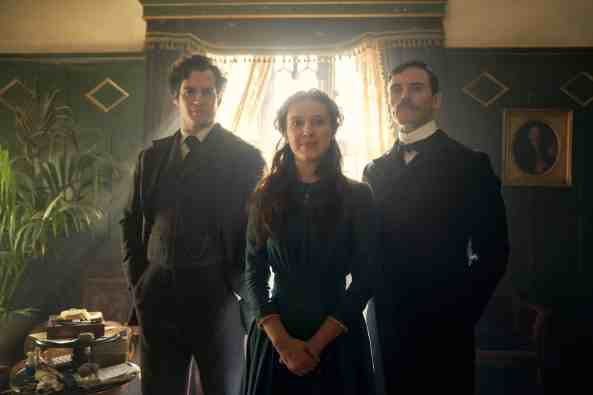 Sherlock Holmes is set to get really, really, ridiculously good-looking as Netflix has revealed the first trailer for Enola Holmes, starring Millie Bobby Brown (Stranger Things) as the titular character and the square-jawed Henry Cavill as her famous brother, Sherlock Holmes. The movie caters to the teenage crowd, giving Netflix a solid entry into the young adult space as it adapts the popular series of YA books into what it no doubt hopes will turn into a series of films.

Enola, who is not an actual character in the original Sherlock Holmes books, is a young, spirited girl raised by her mother (Helena Bonham Carter) with little of the grace and civility expected of a girl in 1884. However, when her mother goes missing, leaving behind only a few gifts, she must contend with her already famous brothers attempting to send her off to finishing school while trying to discover exactly what happened to her. The stakes get high as Enola finds herself entangled in a conspiracy that could set back the course of history while meeting a young, runaway Lord (Louis Partridge) caught up in the evil plot.

Enola Holmes has YA written all over it, but that isn’t a bad thing per se. Netflix is clearly trying to establish another franchise, and it’s collected an insanely good cast to do it while also investing the money. The biggest failing of the glut of YA movies landing over the last few years is a lack of vision and effort, but judging from this trailer, it looks like Netflix has that in spades. If they get the tone, which seems to mix Robert Downey Jr.’s films and Benedict Cumberbatch’s show, it could be a fun take to watch.