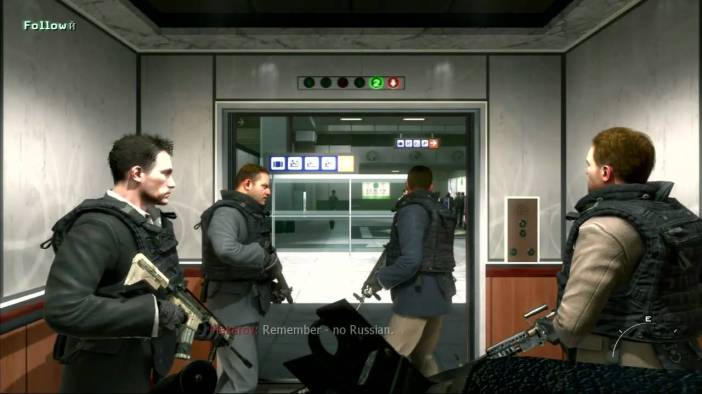 It turns out the decision to include one of gaming’s most controversial missions, “No Russian” in Call of Duty: Modern Warfare 2, was not easy for developer Infinity Ward.

There was a side of the studio that felt that it should be played from the perspective of a security guard that got caught up in it, then there was the other side that liked the way it was going. I remember doing all the civilians for No Russian, and I just wouldn’t … there was a point in time where we were discussing how gory we would get with the people who were getting hit. I pulled back, and I said, ‘You don’t need it. People are getting tagged and their squibs are going off; it’s all good.’

Despite first deciding to pull back on the brutality an event like this could cause, Emslie ended up putting more gore into the level after showing “No Russian” to his wife. When presented with the scene, she simply asked, “Where’s all the blood and guts?” Emslie said, “She called me out. She calls me on my bulls—.”

“No Russian” pulled in its fair share of criticism after Modern Warfare 2 released in 2009. The level follows undercover CIA agent Joseph Allen. While investigating series villain Vladimir Makarov, Allen, and by extension the player, finds himself taking part in a mass shooting terror attack on an unsuspecting airport.

Infinity Ward looks to be bringing back the dark tones found in missions like “No Russian” with this year’s reboot, Call of Duty: Modern Warfare. Infinity Ward is still staying pretty quiet about the finer details of the next Call of Duty’s story mode, but more is sure to be revealed before the game releases for PC, PlayStation 4, and Xbox One on Oct. 25.