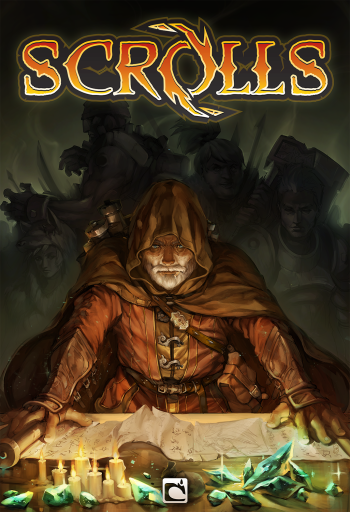 A new game mode and spectating tools are coming to the Minecraft developer’s collectible card game.

A new competitive mode for Mojang’s Scrolls is coming in October. A large update to the game will introduce Judgement mode, spectator mode, new scrolls, and greater customization options. Judgement mode does not rely on a player’s collection of scrolls to build a deck. Instead, the player chooses from a set selection of scrolls, selecting one out of four offered until 45 have been chosen. Those scrolls become the basis for a 30-scroll deck used for five competitive matches. This gameplay mode is similar to draft styles for other collectible card games. Spectator mode will be helpful for both tournament play and players looking to develop their skills. Expect a short delay on broadcast matches, in order to prevent players from gaining an unfair advantage by watching their opponent’s stream.

Scrolls has been compared to other collectible card games, such as Magic: The Gathering and Duel of Champions. Scrolls take the place of cards in each player’s deck. Current game modes include ranked matches against other players, unranked challenge matches, and quick matches against AI opponents. Tutorials and custom matches, called trials, are also available to develop your skills and build up your gold, the in-game currency. Shards, the game’s real-money currency, are used to purchase cosmetic items. Some scrolls are available for purchase with either currency.

Scrolls is currently in open beta on PC and Mac. It is available by digital download with a price tag of $20 USD.