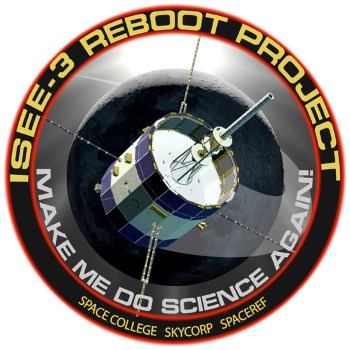 A group of “citizen scientists” is hoping to reactivate an old NASA satellite that’s slowly orbiting the sun and “make it do science again!”

Back in 1978, NASA launched the ISEE-3 satellite to study the flow of solar winds. After that mission was completed in 1981, it was redirected to observe a pair of passing comets, and following that, it took up orbit around the sun, where it remains to this day. Now, that orbit is about to bring the satellite closer to Earth than it’s been in more than three decades, and that’s led a company called Skycorp Inc. to sign a deal with NASA to assume control of the satellite and hopefully get it operational again.

The deal was made possible through a crowdfunding effort known as the ISEE-3 Reboot Project, led by the non-profit group Space College, which raised nearly $155,000 to cover the cost of the recovery, which NASA couldn’t afford to pay for itself. With funding in place, NASA signed a Non-Reimbursable Space Act Agreement with Skycorp, granting it permission to attempt to contact, command and control the satellite. The plan is to put ISEE-3 into a stable orbit between the Earth and the Sun at the Lagrangian 1 point, after which, if all goes according to plan, it will be brought back online completely and put back to work.

It’s obviously something of a long shot, but NASA has previously said that 12 of the satellite’s 13 scientific instruments were still working the last time they checked, although that was in 1999. If the effort to recover ISEE-3 fails, it will continue on its way, past the moon and around the sun again; but if it succeeds, it’ll be a very cool moment indeed, and with some practical value to boot.

“New data resulting from the project will be shared with the science community and the public, providing a unique tool for teaching students and the public about spacecraft operations and data gathering,” NASA said. “The data also will provide valuable information about the effects of the space environment on the 36-year old spacecraft.”