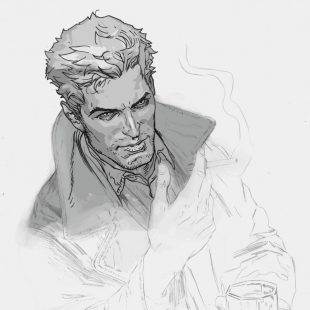 Up until just a few years ago film and television tended to be unkind to comic book adaptations. Sure, you might get the occasional gem (usually animated), but overall the history of people trying to transform comics into other media is lined and littered with failures.

Case in point, the 2005 Keanu Reeves version of Constantine. Sure, it’s probably not the worst film version of a comic ever made, but it was a pretty terrible adaptation of the Hellblazer book on which it was based. It’s understandable, in turn, that franchise fans would perhaps be a bit apprehensive about ongoing plans to bring the franchise to NBC.

That said, according to writer and producer David Goyer, fans can expect the new TV series to “[cling] more closely to the source material then the film.” For instance, the character of John Constantine will “actually [be] played by a British guy,” he said. The “British guy” in question was, of course, recently confirmed to be actor Matt Ryan. Goyer also said that the character’s costume will mirror his comic counterpart and that viewers can expect visits from other DC characters.

Even if fans from of the book can expect a more accurate rendition of the series, Goyer conceded that the show might still have to make some compromises before it can air. For instance, John Constantine’s character likes to smoke, a vice that NBC may not allow. “That’s a tricky one on network TV,” he said. “We’re negotiating right now. He will have his signature trench coat and skinny tie.” Whether or not that will be enough to earn the affections of comic fans is something we’ll have to wait and see. All we know is that there’s a lot of room for this to go wrong.

Source: I Am Rogue

World of Warcraft: Warlords of Draenor Will Launch on or Before 12/20/14