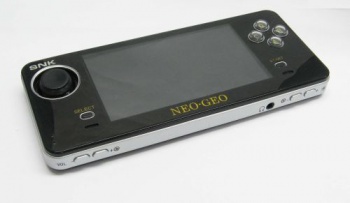 Those of you who follow our coverage religiously may recall an article from January of this year detailing a then-rumored handheld machine endorsed by SNK Playmore that would play classic Neo Geo arcade titles. Well, according to a new report by MCV, the handheld is real.

Video game accessories and retro console specialist Blaze has struck a deal with Japan’s SNK Playmore and US distributor Tommo to bring the NeoGeo X handheld console to market.

It will come with 20 licensed games built-in, such as Fatal Fury and The King of Fighters ’94. The NeoGeo X will also feature an SD card slot, a 3.5-inch LCD screen, A/V output, internal stereo speakers and a headphone socket.

MCV understands the console will be released in limited edition form and could be priced up to £500.

At current exchange rates, that figure translates to $783 US dollars — a premium that seems dictated almost entirely by the fact that this so-called “Neo Geo X” will be produced in limited quantities. Unless it recently became prohibitively expensive to license twenty-year-old, emulated games, but that makes no sense.

So Neo Geo fans, are you still psyched for this machine? Or has the huge cash outlay turned you off from picking one of these things up when it goes on sale in the second quarter of 2012?