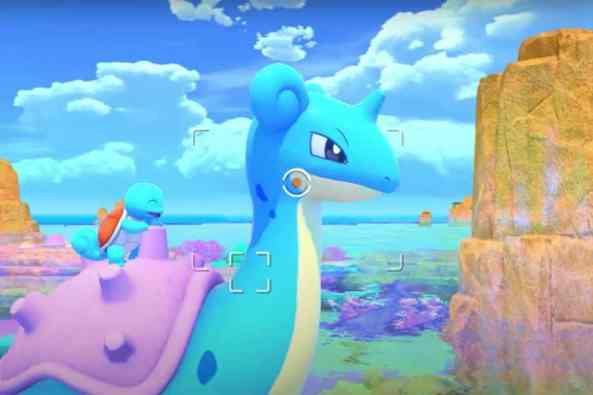 In today’s Pokémon Presents showcase, a new Pokémon Snap game was announced for the Nintendo Switch appropriately titled New Pokémon Snap. The game will be developed by Bandai Namco.

This is the second entry into the series since 1999’s Pokémon Snap on Nintendo 64. Players this time around will be able to discover brand new islands and encounter varieties of different Pokémon. These islands are hosts to many kinds of environments ranging from jungles to tropical beaches.

It looks like the game will feature updated Pokémon spanning across every new generation since 1999. The reveal trailer showed Pokémon such as the 5th generation’s Emolga from Black and White, 4th generation’s Torterra from Diamond and Pearl, and the latest 8th generation’s Scorbunny from Sword and Shield. Players can travel in a vehicle and navigate around the islands, taking pictures of Pokémon in their natural habitats and studying their behavior.

Currently, New Pokémon Snap does not have a confirmed release date. However, Pokémon Company CEO Tsunekazu Ishihara stated that another Pokémon Presents event will drop next week on June 24 with a “big project.” Hopefully, it will be those long-awaited remakes of Pokémon Diamond and Pearl for Switch.

Other, smaller announcements from Pokémon Presents include Pokémon Smile, a tooth brushing app for children, and Pokémon Café Mix, a puzzle game for Nintendo Switch and mobile devices. Mega Evolution is coming to Pokémon GO as well.