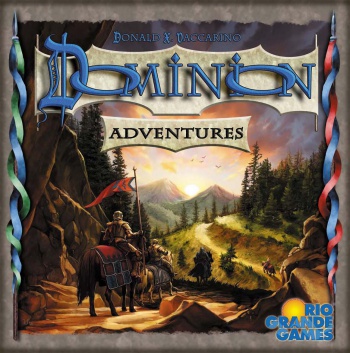 Dominion: Adventures is the first of “occasional expansions” for the card game.

Rio Grande Games announced the ninth expansion to Dominion, called Adventures. Fans will note that earlier expansions, such as Dark Ages and Guilds, were supposed to be the final regular expansions; Adventures is the first of “occasional expansions.”

Adventures is a large expansion containing 400 cards. There will be 30 kingdom cards, which grant you the ability to draw cards or attack other players, including Duration cards. The card type Duration was introduced in the Seaside expansion, and it generally introduces an effect later in the game, frequently at the end of the following turn. There will also be Reserve cards “for the right moment” and 20 Event cards to give players something else to buy, like tokens that modify cards.

The flavor text for Adventures speak of heading in a fifth, unspoiled direction to gather riches with your sword, and of course your trail mix, too.

Dominion‘s base set is a great way to get into the card game. Players build decks in the middle of the game by buying cards. Players may buy victory points, and the person with the most victory points by the end wins. While the base set has enough cards in it to make the game feel different each time you play, the expansions add new mechanics and new strategies.

Rio Grande Games did not give a planned release date for Dominion: Adventures.