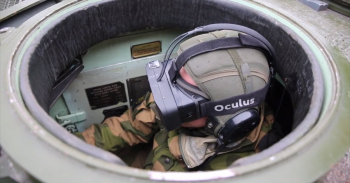 The Norwegian army plans to use the Oculus Rift to give tank drivers an unobstructed view of their surroundings.

The Norwegian Armed Forces are testing the Oculus Rift in conjunction with armored tanks. Drivers are able to effectively see through the body of a tank thanks to mounted cameras on the tank and wearing the Oculus Rift.

Inside a tank with the hatch closed, tank drivers have a difficult time navigating. With cameras mounted on the sides of a tank and the use of the Oculus Rift, drivers can get a 360-degree video feed of the surroundings to essentially see through the tank’s armored body. Software wraps the spherical views from the cameras back to a normal view. Drivers with the Oculus Rift are able to see 185 degrees from each side of the vehicle and can look straight down in front of the vehicle.

Software engineer Daniel Ervik of Making View even compared using the Oculus Rift to playing Battlfield: “Those who play Battlefield can see much better than you do in an actual vehicle,” he said. “With our software you can add elements we are used to from games.”

Eye strain makes driving with the Oculus Rift too difficult for regular use and travel over long distances, but it could be used in combat scenarios when the hatch to the tank must be kept shut. When not in dangerous situations, drivers prefer to keep the hatch open.

The Norwegian TV station TuTV released a video of the Oculus Rift in use by the Norwegian Armed Forces in a non-combat situation.

Source: TuTV via The Verge

The Show You Should Be Watching: Rick & Morty