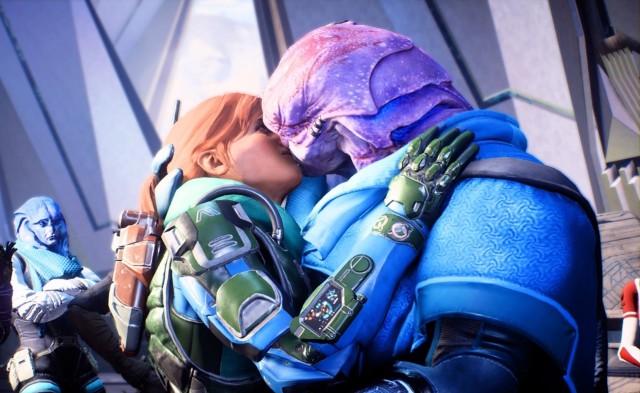 Scott Ryder is getting an extra same-sex romance option in Mass Effect: Andromeda and more customization thanks to the upcoming 1.08 update. Get all the details below.

Jaal Ama Darav, the angaran squadmate that was originally exclusively romantic towards Sara Ryder has been expanded. According to the people at Bioware, this change was in response to the lack of same-sex partners for Scott Ryder — previously, it was impossible to earn the achievement for getting romantic with three partners. There were only two male same-sex partners, versus four female same-sex partners.

With Jaal’s inclusion, that now ups the number to three. And, the people at Bioware say, this makes total sense. Jaal’s race, the angarans, see gender more fluidly, and thus would be romantic with Ryder, no matter which gender the player chooses.

This isn’t the only addition in the 1.08 update. Learn more about the changes and what else is coming below.

Like all other romance options in Andromeda, romance is not longer “locked in”, choosing to date a particular character will not block off other interactions, and there is no time limit. Most restrictions have been removed, save for which characters your Ryder can romance.

For a quick overview, here’s the updated list of romantic partners:

The 1.08 update also adds two new head options, one for Sara and one for Scott, and unlocks all hair options, including bald for all genders. Ryder’s appearance can also be changed in-game using terminals in the Tempest.

Happy about these changes? Annoyed? It’s good that Bioware is still updated Mass Effect: Andromeda and trying to make it better. Let us know what you think!