This article contains potentially significant spoilers about Mass Effect 2. Read at your own risk.

After about 24 hours of play in the space of six days, I finally reached the conclusion of Mass Effect 2 on Sunday night. It was a bumpy ride: Once I completed Jack’s loyalty quest, she decided to snub me after I sided with Miranda in what I thought was a trivial argument. Then, thanks to her less than complete faith in my leadership abilities, she faltered in the final mission and ended up costing Thane his life (something I learned only after reading a thread in our forums). And because I wasn’t aware that waiting for too long after my crew was abducted would result in most of them being liquefied, they became Reaper juice while I maxed out the damage on my assault rifle.

Yet looking back on my time spent with Shepherd and his comrades, I have only one regret: that I spent hours scouring the galaxy for Element Zero while my “to play” stack collected dust.

As Susan Arendt noted in her review, Mass Effect 2‘s mining system is perhaps the one major blemish in an otherwise wonderful game. What could have added some variety to the experience of exploring the galaxy (similar to the way in which the hacking minigames offer a decent change of pace from the squad-based gunplay) ended up becoming tedious right out of the starting gate. Why did it fail so hard? Let me count the ways:

Sure, it’s easy enough to limit yourself just to “rich” planets and nodes that produce serious scanner spikes, but that’s the problem: There’s no discernable pattern that allows you to seek these out more effectively. And if you’re in need of a specific mineral to obtain a crucial upgrade, you’re even more out of luck – even “rich” planets rarely contain even a single cache of Element Zero, probably the most desirable mineral type due to its use in both biotic upgrades and skill-based training like Tactical Shift (Mass Effect 2‘s version of re-speccing). Yes, that randomness makes it even more satisfying when you finally do stumble into a planet with a decent supply of Element Zero, but it’s only satisfying because it means you’ll be finished that much sooner.

There was a brief, tantalizing moment after I first unlocked the “scanning speed” upgrade when I wondered whether the whole process would become almost effortless by Mass Effect 2‘s endgame. “How many scanning speed upgrades could there be?” I wondered. “And what about scanning radius? Or an upgrade that indicates on the planetary map which areas you’ve already covered? Or an upgrade that gives you a global thermal readout of all the planet’s mineral nodes, so you could pick and choose which ones to harvest?” There seemed to me to be about a half dozen ways to make the experience of mining, if not more fun, then at least less mind-numbingly boring than it currently was.

Instead, I got more probes. Thanks a bunch, Thane. 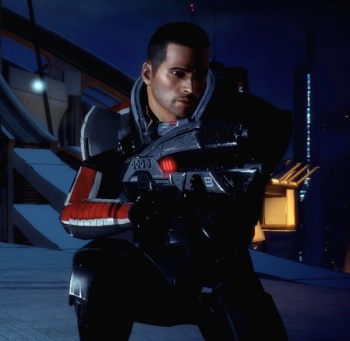 Not mentally tiring – the process of searching for minerals requires so little brainpower that I found myself wondering how to activate my TV’s picture-in-picture function so I could catch up on The Daily Show while I mined. I mean it’s physically tiring, which is not something you’d expect from a game that doesn’t involve flailing around a remote or doing push-ups on a Bluetooth-enabled bathroom scale.

There’s only one way to improve your scanning speed after you upgrade your ship’s sensors for the first time: Instead of keeping the left trigger depressed, you “fan” the trigger so that your targeting reticle skips, rather than glides, across the planet’s surface. It’s not perfect – you might miss a node if you don’t space out your scans correctly – but when done correctly, it can shave a couple minutes off each planet. The one major downside is that by the time you have enough platinum to research the Medical Bay, you’ll likely have carpal tunnel syndrome. And the alternative of keeping the left trigger depressed isn’t much better – you end up with your left hand frozen in a claw position that gets increasingly uncomfortable the longer you go without finding a node. I realize ergonomics aren’t necessarily of primary importance to software developers, but when your game encourages behavior that becomes physically painful over the course of a half an hour of play, you’re probably doing something wrong.

For a AAA title, Mass Effect 2 is pretty damn harsh when it comes to punishing player incompetence. Neglect to upgrade your ships cannons or shields, for instance, and you end up losing party members before the final mission even gets off the ground. What’s frustrating is that as it currently stands, there’s no way to acquire minerals in any significant quantity aside from scuttling across the galaxy and scanning every planet you come across for the stuff – the amount of minerals you find in a typical away mission is less than a few probes’ worth.

Mass Effect 2 is a pretty flexible game when it comes to letting you choose how to play. There’s a decent amount of variety in the class system, and thanks to the Advanced Training and Tactical Shift research projects, you can experiment with a variety of abilities and specializations in a way the original game didn’t allow. But if you want max out the firepower of a specific weapon, outfit your party with better gear or, heck, prevent your squadmates from dying, you have to mine, and mine a lot. There’s an entire Asari planet that functions as a sort of galactic stock exchange, and you’re telling me I can’t buy raw materials on the open market?

It’s telling that after narrowly preventing the extinction of the human race, what I was most happy about was the 50,000 Element Zero the game granted me upon completion. I may have saved the galaxy … but more importantly, I saved myself a few hours on my next play through. Maybe then I’ll pick the lives of my crew over those last few points of damage for my assault rifle.

Jordan Deam will probably pick the damage bonus to his assault rifle all over again.