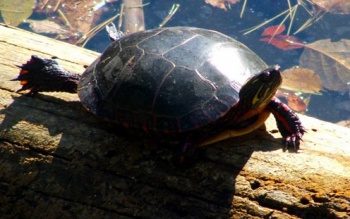 A new iOS game called Ninja Turtles contains no ninjas, no turtles, nor any mutagenic combination of the two. Unsurprisingly, people are angry.

Created by Vietnamese developers Namphuong Star, the $5 game borrows assets liberally from a number of sources. “The app uses official Ninja Turtles art for its icon, backgrounds from NES shooter Contra, effects from SNK’s Metal Slug, and some amateurish recreations of the titular turtles,” according to Edge.

Unsurprisingly, the App’s review page is full of consumers venting their frustrations.

The character immediately slides off the side of the screen. There seems to be no way to actually interact with the game. And there doesn’t seem to be any way to start a new game. The use of the Teenage Mutant Ninja Turtles characters on the splash screen are almost certainly infringement; the blob that slides off the screen during the actual game isn’t identifiable as a turtle. Or much of anything.

Visiting the developer website and the support site both go to the same spammy, Vietnamese-language website selling iPhone and iPod accessories. There doesn’t appear to be any actual support. Deleted and requested refund.

Terrible software and bootleg games are nothing new, but the real question this situation raises is how a title like Ninja Turtles that is both completely broken and presumably in violation of several copyrights could pass through Apple’s secretive review process.

Apple has yet to comment on the situation and as of this moment, Ninja Turtles is still available for purchase if you have an Abe Lincoln in your pocket and a total disdain for responsible spending.