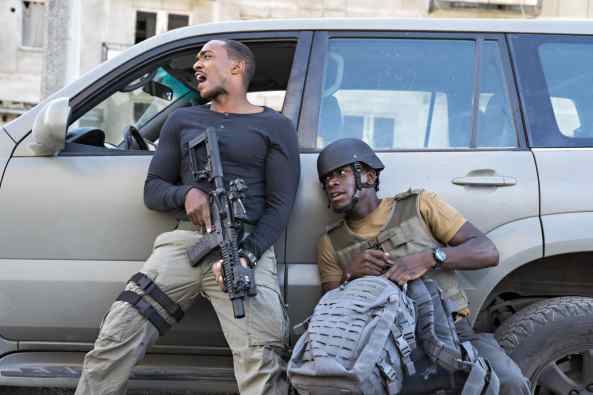 Androids. They’re probably just a bad idea that will lead to the downfall of humanity, but they make for great action movies. The latest film featuring one, Outside the Wire on Netflix, is taking a bit of a twist on the evil android concept by layering in some shades of gray as Anthony Mackie stars as Leo, the military’s test run of an android soldier. He gets partnered with Harp (Damson Idris), and things seem to go a little off the rails.

Outside the Wire takes place in 2036 when clearly the U.S. government is using robots to fight wars alongside people. Harp, a drone pilot, disobeys an order and is sent to an outpost to serve under Captain Leo, who takes him on a dangerous mission to apprehend Viktor Koval (Pilou Asbæk), a warlord who is trying to launch a bunch of dormant nuclear weapons. The story would seem pretty trite if the trailer didn’t hint at Mackie’s character being a bit more layered than a half-robot/half-human super-soldier.

It is a bit hard to expect a lot from the film. Even though Netflix proudly slaps its two other successful action films — Extraction and The Old Guard — into the trailer, the movie really isn’t that connected outside of the fact that Netflix made them all. This one looks far more B-grade than those other two films and definitely doesn’t have the same caliber of filmmakers behind it, with journeyman director Mikael Håfström behind the camera and a story by video game writer Rob Yescombe (RIME, The Division).

Outside the Wire also stars Michael Kelly (House of Cards), Emily Beecham (Hail, Caesar!), and Enzo Cilenti (Guardians of the Galaxy). It will land on Netflix on Jan. 15, so you can stream it after binging WandaVision on Disney+.