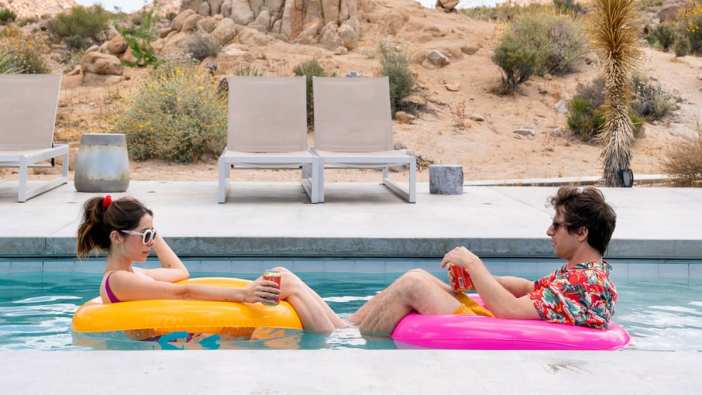 Palm Springs was a Sundance darling back when we had film festivals and little comedies could gain a lot of buzz. It’s now landing straight on Hulu with a limited theatrical release, but that doesn’t mean it doesn’t still look fantastic. The first trailer lets the time-loop plot out of the bag and delivers plenty of comedy between stars Andy Samberg and Cristin Milioti.

As you can tell, this is another riff on Groundhog Day, but the difference here is that we’ve got two people going through the time loop together, with one of them being an experienced time looper. Sarah meets Nyles at a friend’s wedding, but after following him into a magic cave of some sort, she becomes stuck in a time loop with him, reliving the same day over and over no matter what they do. Nyles has kind of consigned himself to an eternity of doing whatever he wants, including drugs and committing crimes, but that doesn’t work for Sarah.

The film co-stars J.K. Simmons, who may also be stuck in the loop alongside Samberg and Milioti. This is director Max Barbakow’s first feature film, but reviews out of Sundance say he nailed it. Hulu and Neon produced the movie and were hoping for a wider release before COVID-19 hit, but being produced by the streamer gives the film an easy place to land on as our couches become our movie theaters.

Hopefully, this turns out better than Netflix’s stab at the time-centric rom-com, Love Wedding Repeat, which fell flat on its face from the get-go.

Palm Springs will release on Hulu on July 10.