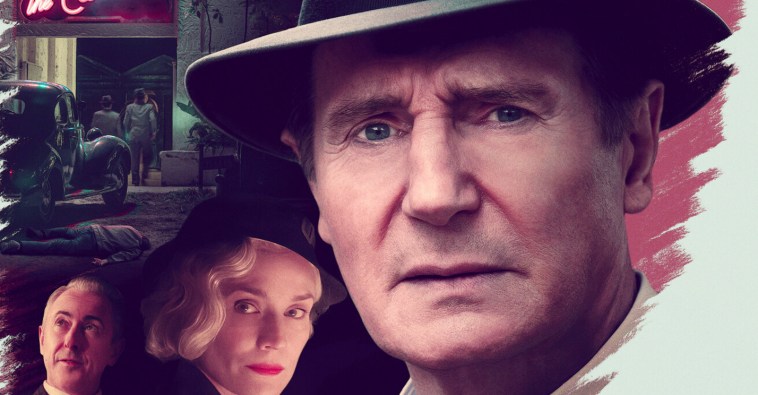 Liam Neeson has made a lot of movies (100 to be exact), and ever since Taken turned him into an aging action star, most of them have been bad budget action films made on the cheap. The actor has been somewhat pigeon-holed as a leading man for more than a decade now, but it appears Marlowe is here to possibly let him do something else. The new film dropped its first trailer today, showing off its classic noir style as Liam Neeson takes on the role of the iconic detective Philip Marlowe.

Pulp novel, noir, and film buffs will all, of course, know the name Philip Marlowe intimately. He is the genre’s greatest detective, originally created in the hard-boiled detective stories written by Raymond Chandler primarily in the 1940s and then brought to the screen most famously by Humphrey Bogart in The Big Sleep. Plenty of other actors have tackled the role (Elliott Gould most successfully in The Long Goodbye), and now it is Neeson’s turn to bring his gravelly voice to narrating a crime story that has all the trappings of a classic noir. Based on the novel The Black-Eyed Blonde — a sequel story to The Long Goodbye written by Benjamin Black — the film tells the story of private eye Philip Marlowe once again pulled into a twisting mystery by a beautiful woman showing up at his office. He is hired to find the ex-lover of a glamorous heiress (Diane Kruger), who is the daughter of a well-known movie star (Jessica Lange).

It all may seem incredibly cliche, but there’s something to be said about holding to the classics and this one seems to be shooting as straight as you can to hit classic noir. It makes sense coming from director Neil Jordan, who has made a career out of pulpy but fantastic films like The Crying Game. He’s working off a screenplay by William Monahan, who has much the same background. Also starring in the film are Adewale Akinnuoye-Agbaje (His Dark Materials), Alan Cumming (GoldenEye), Danny Huston (Wonder Woman), Colm Meaney (Star Trek: The Next Generation), and Daniela Melchior (The Suicide Squad).

As its trailer notes, Marlowe hits theaters with Liam Neeson on February 15.