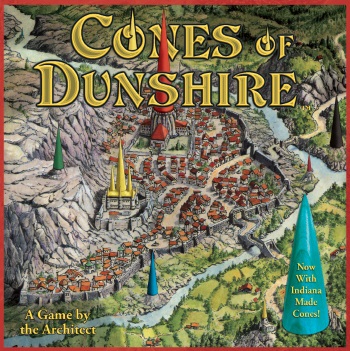 An oversized carpet version of the convoluted board game created by Parks and Recreation‘s Ben Wyatt will be played at Gen Con 2014.

When Parks and Recreation‘s Ben Wyatt (Adam Scott) is between jobs, he gets a little obsessive. His first bout with unemployment in season four led to the Claymation classic, “Requiem for a Tuesday”, while after being laid off in season six Wyatt created the elaborate board game The Cones of Dunshire. The props for the game, which combines elements of Settlers of Catan, Dungeons and Dragons, Dominion, and Ticket to Ride, were created by tabletop games publisher Mayfair Games. Announced June 27, Mayfair Games and Parks and Recreation will present a charity event at Gen Con 2014, where 33 people will play an oversized carpet version of The Cones of Dunshire. Tickets to play the game cost $100, and spectators are encouraged to watch the event and to donate cash or canned goods. Mayfair will match all money raised the event tickets, and all of the donations will go to the 2014 Gen Con Official Charity, Gleaners Food Bank of Indiana. Everyone who contributes at the event will receive a special Cones of Dunshire item.

Players will be grouped in threes to collectively play one of the many classes in The Cones of Dunshire, including two Wizards, a Maverick, the Arbiter, two Warriors, a Corporal, and brand new classes created for the event. Players who want to play as a team can contact Mayfair to arrange to play together. The object of the game is to collect cones. Four cones wins, but as Wyatt describes the game, “In order to get a cone, you have to build a civilization.”

Mayfair Games told Vulture in December that it doesn’t plan to create a home version of The Cones of Dunshire. “It was never our plan, and it is not now our plan, to make a commercial version of Cones of Dunshire,” says Pete Fenlon, Mayfair Game CEO. The charity event may be the only chance to play Wyatt’s game. “It’s our hope for the Parks & Rec guys to be there, for Ben [Wyatt] to play his own game,” says Fenlon.