In any group of people working towards a common goal, there is the potential for drama. I’m sure you’ve experienced it. One guy will have this awesome idea, the most awesomest idea in the world, but the rest of the team just can’t get behind it, for whatever reason. That person can start to feel like the rest of the group is against him, which of course they are, at least in this instance, and he will start to lash out in retaliation. His negative feelings can then poison the efforts of the group, leading to more drama. I’ve seen it happen a million times, in all kinds of situations from family trips to writing collaborations to the Los Angeles Lakers. When it happens in a role playing group, though, it can be especially devastating because roleplaying games are cooperative storytelling. In many ways, playing them is an elaborate exercise in group decision-making. So if one facet of that group matrix is malfunctioning, then the fun of the whole group is in danger.

For that reason, I think that it is always a good idea to identify the conflict and solve it as soon as possible. You could say that, as a player, it’s not your job to fix the group dynamic, that’s GM territory. While there are certain situations where asking the GM to intervene is the right call, it doesn’t mean that you can’t be a good, proactive player and help to iron out the difficulties on your own (as Alex’s columns have pointed out, GMs have enough to worry about). Luckily, I’ve learned a few ways to deal with inter-player drama around the gaming table.

It’s hard to form a group of gamers who like to play the exact same way. As the 4th Edition Dungeon Master’s Guide points out, there are 8 profiles of gamers and they all play for different reasons. A group of 6 people is bound to have 4, 5 or even 6 unique ways to play roleplaying games. Some of these motivators are compatible; the Slayer (wants to kill monsters all the time) and the Instigator (wants to keep the session moving forward) can often have similar goals. But an Actor (wants to speak in character more often than not) might not want to kill the dryad that Slayer and Instigator do, he or she would rather use roleplaying to gain information or feel cool by using the dryad to learn the back way into the Forest Chief’s camp. How do you resolve the conflict that might arise from one course of action (in this case, killing monsters) always being chosen over roleplaying?

The answer is communication and compromise. If you are on the side that doesn’t get to play the game the way that you want, it’s important to make that known to the group. While you can bring it up when the situation arises, tempers might be too heated to have a rational discussion about it and it would slow down play. Try bringing it up at the beginning of a session, when everyone is chit-chatting. You might even want to send an email to the group about your concerns. Don’t be demanding or point fingers, just state that sometimes you wish that the group supported your character in a different course of action. Appeal to them to compromise, without making any judgments on whether their way or your way is the right course. Just that it would make the game more fun to realize that not everyone wants to play the way that they do. The GM might be able to help here by bringing up your concerns to the rest of the group, opening the topic for discussion. 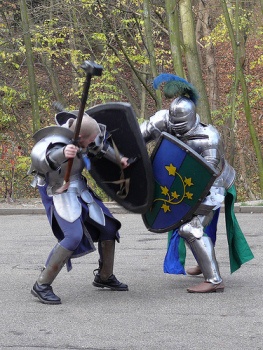 It is up to everyone to be responsible players and realize that others in the party may not want to mercilessly slaughter every enemy you meet. Take a step back and let the less vocal players get to play the way that they want every once in a while. This compromise goes the other way as well. To continue the example, it may not be fun to interrogate every random orc, gnoll or black sludge in the dungeon. Sometimes, the only good orc is a dead orc.

Another problem that I witness often is one player dominating the actions of another, whether on purpose or subconsciously. This can occur to new players quite easily, but I’ve also seen it happen to players of any skill level. The veteran player will often give advice of what spell or action to use in combat, instructing the newbie in how to succeed with their character. A mentor-protégé relationship is common and is a great way to introduce people to the game. It becomes less fun, however, when the mentor is abusing the power and dictates exactly what the other player will do in any situation, either by out and out ordering the action or constantly warning against any novel idea that the new player might have through manipulative language. “Oh, you don’t want to use that fireball now. Wait to use it when we’re surrounded.”

In this situation, it is really important for the player being dominated to assert him or herself. State that you appreciate the advice, but that the decision ultimately rests with you. “It may be the wrong call, but it’s my call to make.” The other player should realize that he had been domineering and stop, allowing play to continue, or he may continue to argue. If that happens, it may be necessary for the GM to step in and declare that the action the previously dominated player chose is what happens. The other player may not like it, but the will of the dominated player is reestablished.

Sometimes the conflict has nothing to do with play but instead derives from two players with incompatible personalities. Whether it is because one player is boisterous and likes to crack jokes at the table and another takes fantasy roleplaying extremely seriously (we’ve all met one of these guys), or one player is extremely argumentative or adversarial and another dislikes conflict, personality issues can be the hardest to address. The best that you can hope for is for the two personalities to tolerate each other. They can accomplish this through communication and by realizing that people around them are different. Discuss the differences, get them out in the open and perhaps through bringing them to light, the two players will be able to work through their disparity.

It’s possible that personality conflicts will never be resolved. In that case, it may be for the best if one of the players excused himself from the group. The entire group will not have fun if the two players are constantly bickering or there is a palpable tension between them. It’s a shame for anyone to quit a pastime like playing RPGs, though, so only use this solution if it is absolutely necessary. Like any conflict, know that it can be worked out and you will learn and grow as a player, as well as a human, through working through problems rather than running from them.

The kinds of conflicts I’ve discussed above are just a few examples. There are many more ways that a group can disintegrate, such as chaotic evil characters killing player characters just because they’re INSANE. That’s just never fun, unless of course, that’s the campaign that you are playing. More on evil parties later…

Greg Tito doesn’t like conflict, but is ok with confrontation.