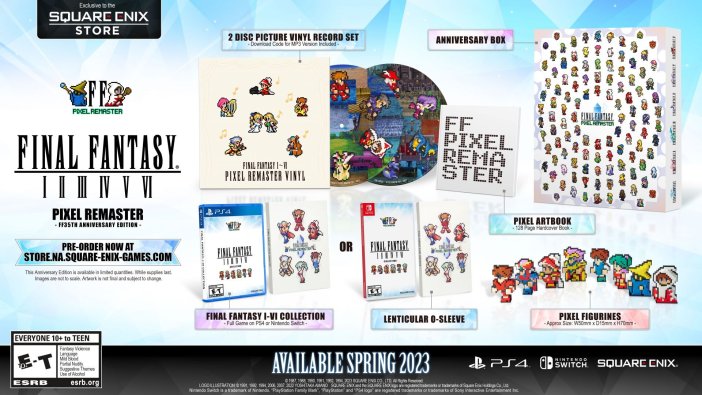 Square Enix has officially announced the full Final Fantasy Pixel Remaster collection (FF1, FF2, FF3, FF4, FF5, FF6) for Nintendo Switch and PlayStation 4 (PS4), and you can preorder a standard or collector’s edition (35th Anniversary Edition) physical copy that includes all six games exclusively at the Square Enix Store right now. Quantities of the physical version are “limited,” and at this time of writing, standard edition Switch copies are already unavailable, currently displaying an option of “Waiting List” instead of “Pre-Order.” More copies of the standard version will come into stock in spring 2023 in “extremely limited quantities.” All other versions are currently available to purchase. All versions of the game will tentatively ship by the end of May 2023, and it has a general “spring 2023” release window right now. The games will also release digitally on Switch and PS4 in that window, individually and as a bundle.

The standard Switch or PS4 physical version of Final Fantasy I-VI Collection, which (to reiterate) includes FF1, FF2, FF3, FF4, FF5, and FF6, is available to preorder exclusively at the Square Enix Store for $74.99, and after tax and shipping costs, it actually works out closer to $100 in total. You will want to purchase as fast as humanly possible to get your hands on a standard Switch copy or a PS4 copy. This version of the game is just a regular box and cartridge including the six games, which have all been remastered with new visuals and incredible rearranged soundtracks. New reports indicate these games may not retain the same ugly font that the PC and mobile versions use.

Meanwhile, the 35th Anniversary collector’s edition of Final Fantasy I-VI Collection on Switch and PS4 is available to preorder for $259.99 exclusively at the Square Enix Store, which after tax and shipping works out to around $300. It includes the following extras: 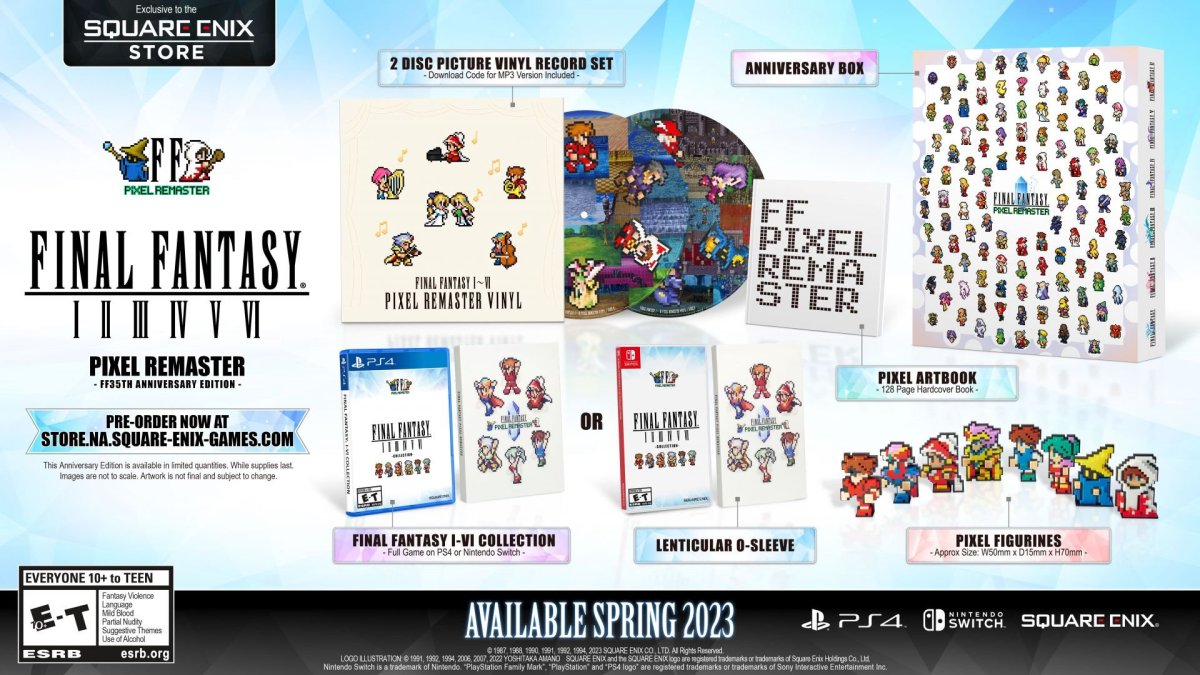 To date, the Final Fantasy Pixel Remaster series has only been available on PC via Steam and mobile devices, which makes this console announcement extremely exciting but also ill-timed for Western audiences.