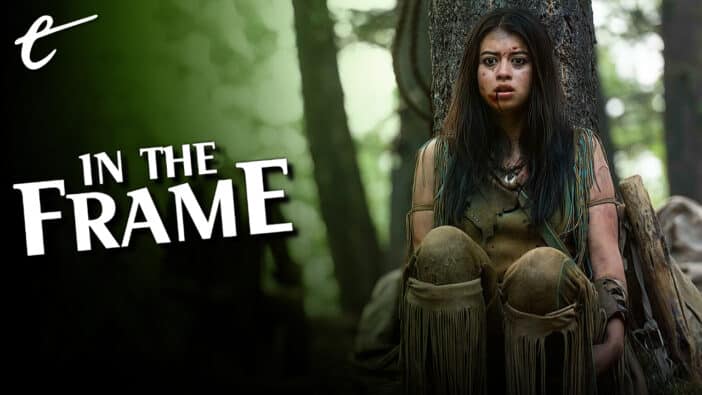 This article contains some spoilers for Prey, the new Predator movie available on Hulu starting today.

Arriving on Hulu this weekend, Daniel Trachtenberg’s Prey offers a satisfying and thrilling sequel to John McTiernan’s Predator. On paper, this shouldn’t be a major accomplishment. The Predator franchise is built around a beautiful monster design and a deceptively straightforward premise: What if there were an alien big game hunter? However, the franchise has a surprisingly uneven track record, with both Predator 2 and The Predator fumbling a remarkably simple formula.

Trachtenberg’s sequel works for a variety of reasons. Most fundamentally, it’s the kind of sequel that doesn’t really exist in the modern era of mega franchises. It is a sequel that takes the original premise and swaps out the cast and the setting to find a fresh angle, eschewing lore-building and exposition for more basic pleasures. After all, Shane Black’s work on The Predator demonstrated that maybe this franchise doesn’t lend itself to that sort of mythology.

Ironically, Trachtenberg dares to go smaller with Prey. The film has the shortest runtime of the five films in the franchise. The budget is appreciably smaller than that of The Predator, which probably allowed Trachtenberg greater creative freedom. It is a shame that theaters can no longer support movies like this, as Prey went direct to Hulu — effectively the modern equivalent of a direct-to-video sequel. Then again, any true action cinema aficionado knows the best action is happening on video.

However, it is more than that. While Trachtenberg scales Prey down from the blockbuster excesses of The Predator, he also tightens the movie’s focus. For the first time since the original Predator, it feels like a filmmaker has a proper grasp on the franchise’s central metaphor. Working with writer Patrick Aison, Trachtenberg hones in on what the original Predator was about and finds a way to tie Prey directly into those big themes. Like Predator, Prey is a horror movie about colonialism. 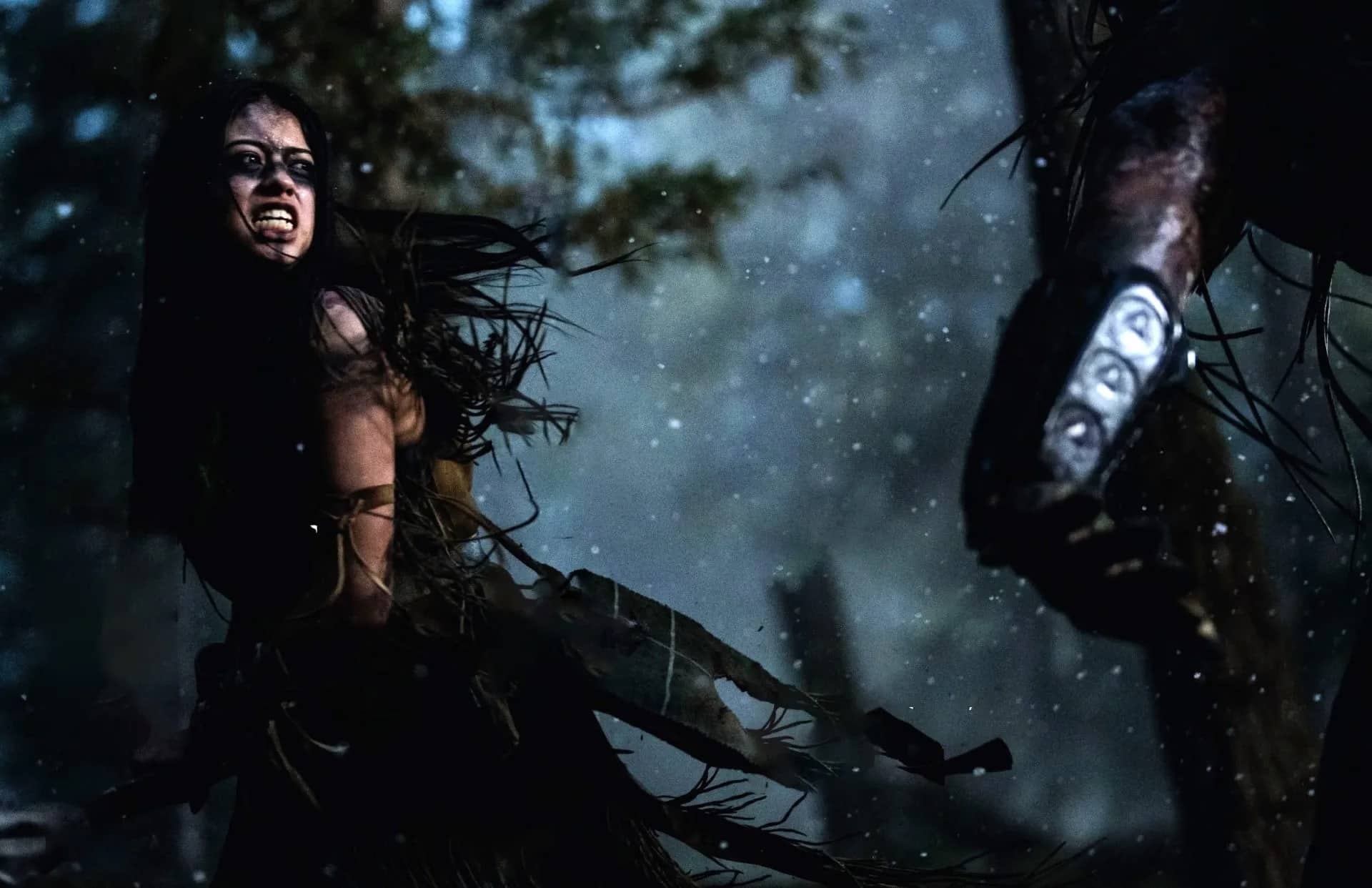 At its core, the Predator is a modern science fiction take on the concept of “the great white hunter.” The term applied to real-life figures like Alan Black and Frederick Selous, along with fictional creations like Allan Quatermain. These figures were often Europeans or Americans who traveled to Africa to hunt exotic game. This was the time when Africa was known as “the dark continent” and its inhabitants frequently portrayed as “primitive.” These hunters quickly built a mythology around themselves.

It wasn’t long before a tourist industry developed around game hunting, with hunters R.J. Cunninghame, Bill Judd, George Outram, and Leslie Tarston launching the first safari business in 1903. The hunter was immortalized in popular culture, with real-life hunters like Bunny Allen consulting on the production of hunting films like Safari and Mogambo. According to author Peter Viertel, John Huston had “an obsession” with shooting an elephant while filming The African Queen.

Similar to Richard Connell’s classic short story “The Most Dangerous Game,” the Predator essentially takes that idea to an absurdly heightened extreme: What if a big game hunter pursued human beings rather than animals? Much like the Americans and the Europeans traveling to Africa with their guns and traps, the Predator arrives on Earth with more advanced technology to stalk and kill its prey. Much like those hunters take ivory from fallen elephants, the Predator takes trophies of its own.

While riffing on these colonial tropes, Predator was a product of its time. It followed a military team led by Major Alan “Dutch” Schaefer (Arnold Schwarzenegger), which is co-opted by Dutch’s old friend Al Dillon (Carl Weathers) for a top secret black ops mission in Central America. It was a rather timely premise for a science fiction action film, with its June 1987 release neatly intersecting with the televised Iran-Contra hearings that covered shady American activity in Nicaragua. 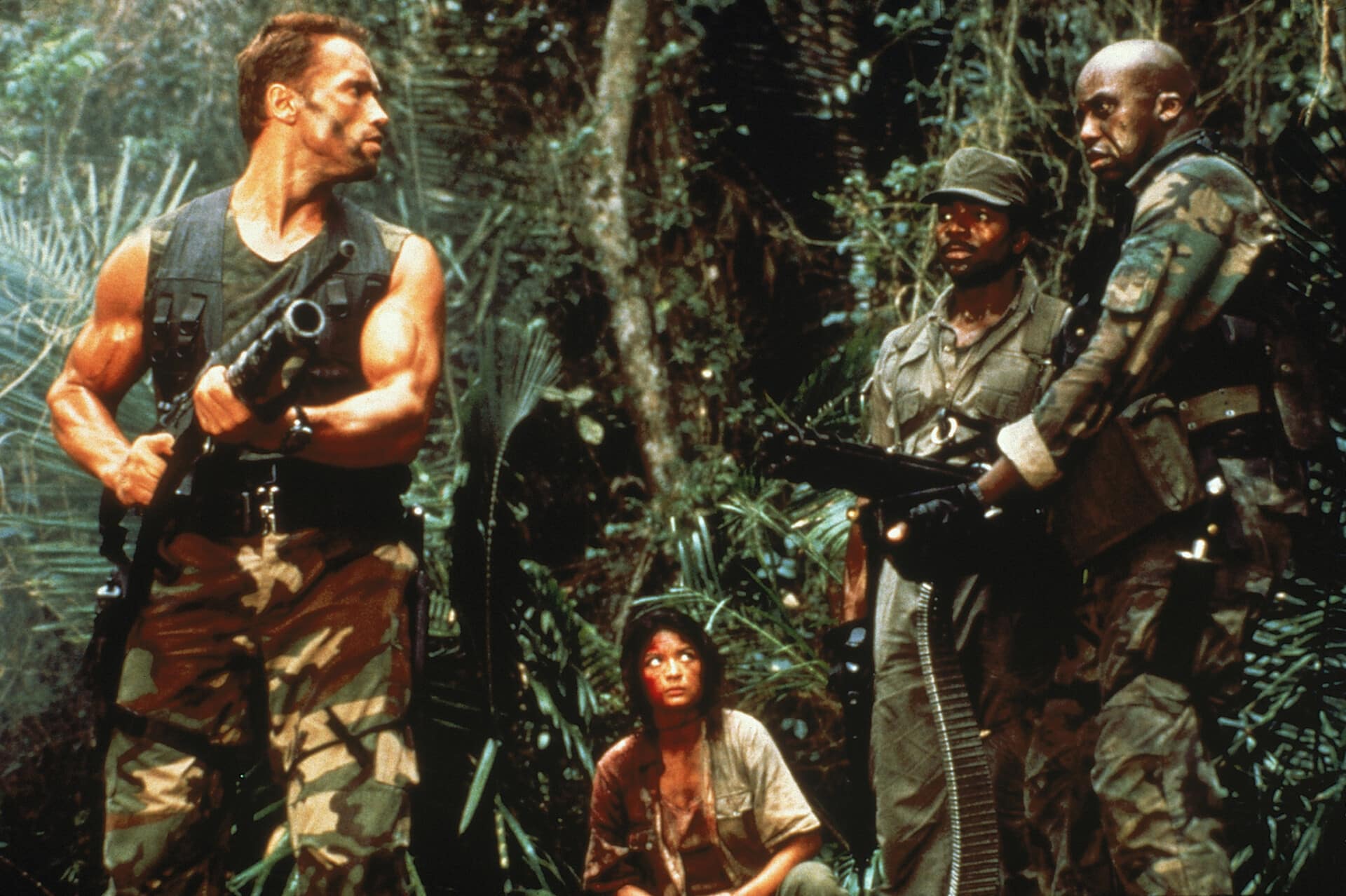 Part of the genius of Predator lies in the obvious thematic layers running through the movie. Just like the Predator is an alien presence on Earth, Dutch and his team are well aware of the fact that they have no business on “the wrong side of the border.” Early in the film, Dutch and his team tear through a rebel base with ruthless efficiency, demonstrating their superior training and firepower. The irony is that Predator will be just as effective in dismembering them.

Like many action movies of the decade, including Return of the Jedi and Top Gun, Predator has been read as a relitigation of Vietnam. It is about an American foreign intervention that goes disastrously wrong. However, like in the Rambo movies, Predator’s protagonists succeed by appropriating the tactics of the Viet Cong, by staging low-tech guerrilla warfare against a technologically superior foe. There is an element of America working through what Nixon called “the Vietnam Syndrome.”

Prey very consciously riffs on the central logic and template of Predator. Trachtenberg and Aison shrewdly populate the film with enough throwbacks and references to the original film. Naru (Amber Midthunder) outwits the Predator (Dane DiLiegro) by hiding from its heat vision, like Dutch did. Taabe (Dakota Beavers) notes that, if the creature bleeds, then it can be killed, mirroring one of the most iconic lines from the franchise. However, Prey doesn’t just evoke simple nostalgia.

Trachtenberg and Aison understand that Predator is a movie about the horror of colonialism, but they push the metaphor even further in Prey. After all, the heroes of Predator are a black ops team that are themselves engaged in extending the influence of the United States into Central America. The most prominent indigenous character in Predator is Anna Gonsalves (Elpidia Carrillo), the only survivor of the raid on the guerrilla camp, who spends most of the movie as an unarmed hostage. 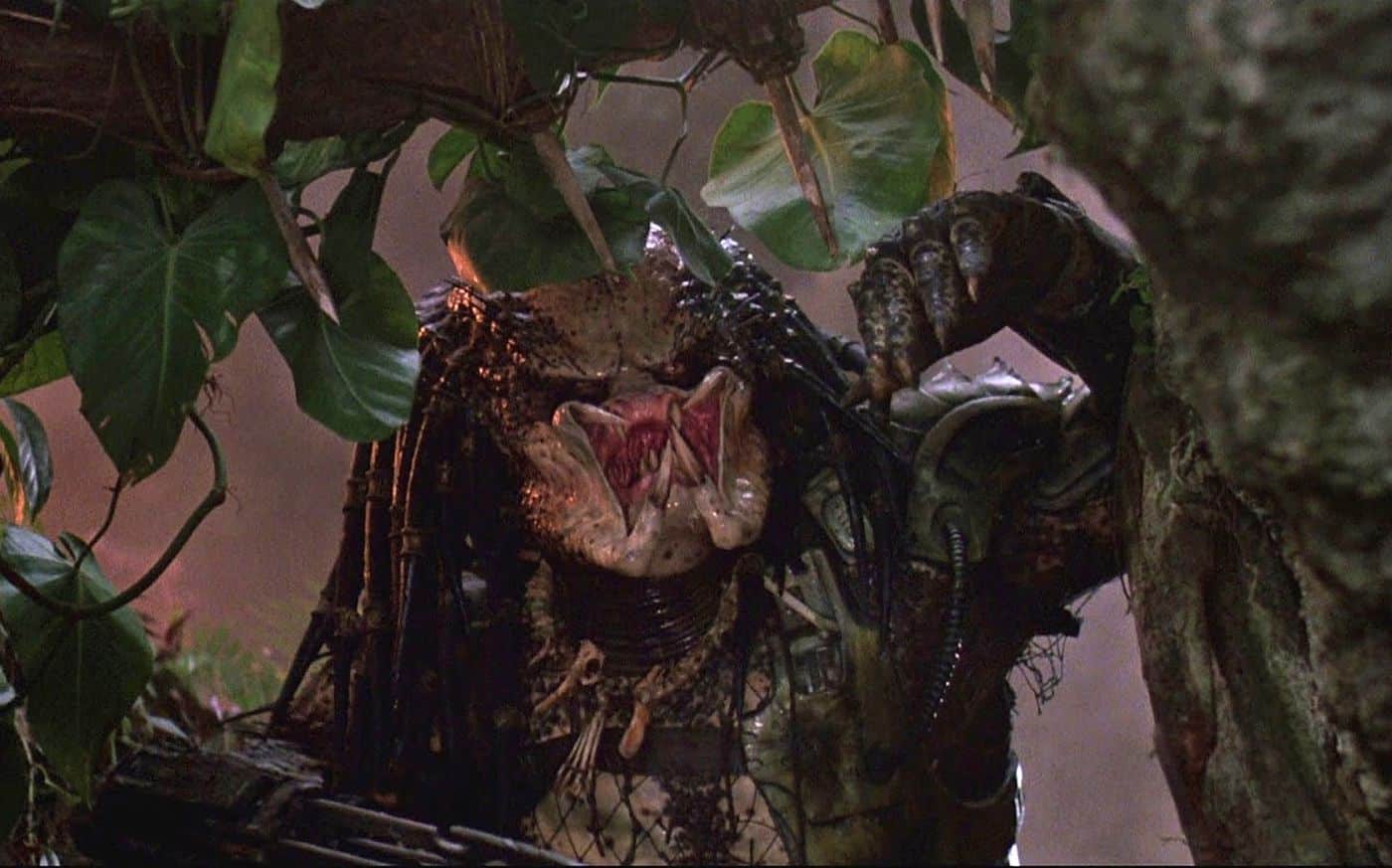 The creature in Predator has little interest in Anna. Because she is unarmed and captive, it declines to kill her during an early confrontation. There is a thematic point being made here, with the implication that the Predator is perhaps best understood as a form of cosmic karmic justice for Dillon’s illegal and off-the-record foreign intervention. Still, there is something interesting in how Trachtenberg and Aison play with that internal logic.

Naru feels less like Dutch and more like Anna. Like Anna, Naru is the most prominent woman in a predominantly male cast. Like Anna, Naru spends extended portions of the film as a captive hostage, overpowered by both her own tribesman Wasape (Stormee Kipp) and later by a French trapper (Mike Paterson). Like Anna, Naru survives her first encounter with the creature because it doesn’t consider her a threat. However, unlike Anna, Naru asserts agency within the plot of Prey.

Rather than focusing on an external force intruding into another nation, Prey focuses on an indigenous population. The film is set on the American frontier, primarily within the Comanche Nation. Repeatedly throughout the film, the Predator is likened to the European settlers who are encroaching on the North American continent. Naru repeatedly encounters traps set by those hunters, which are not too dissimilar to the technology employed by the Predator itself.

At one point, Naru stumbles across a field of skinned buffalo. It directly evokes the skinned bodies hanging from the tree in the original Predator. For a moment, it seems like the alien creature might have done this, until Naru recovers a discarded cigar. The horror is man-made. It is an image taken directly from American history, tied explicitly to the subjugation of the Native American population. To quote an anonymous army official, “Every buffalo dead is an Indian gone.” 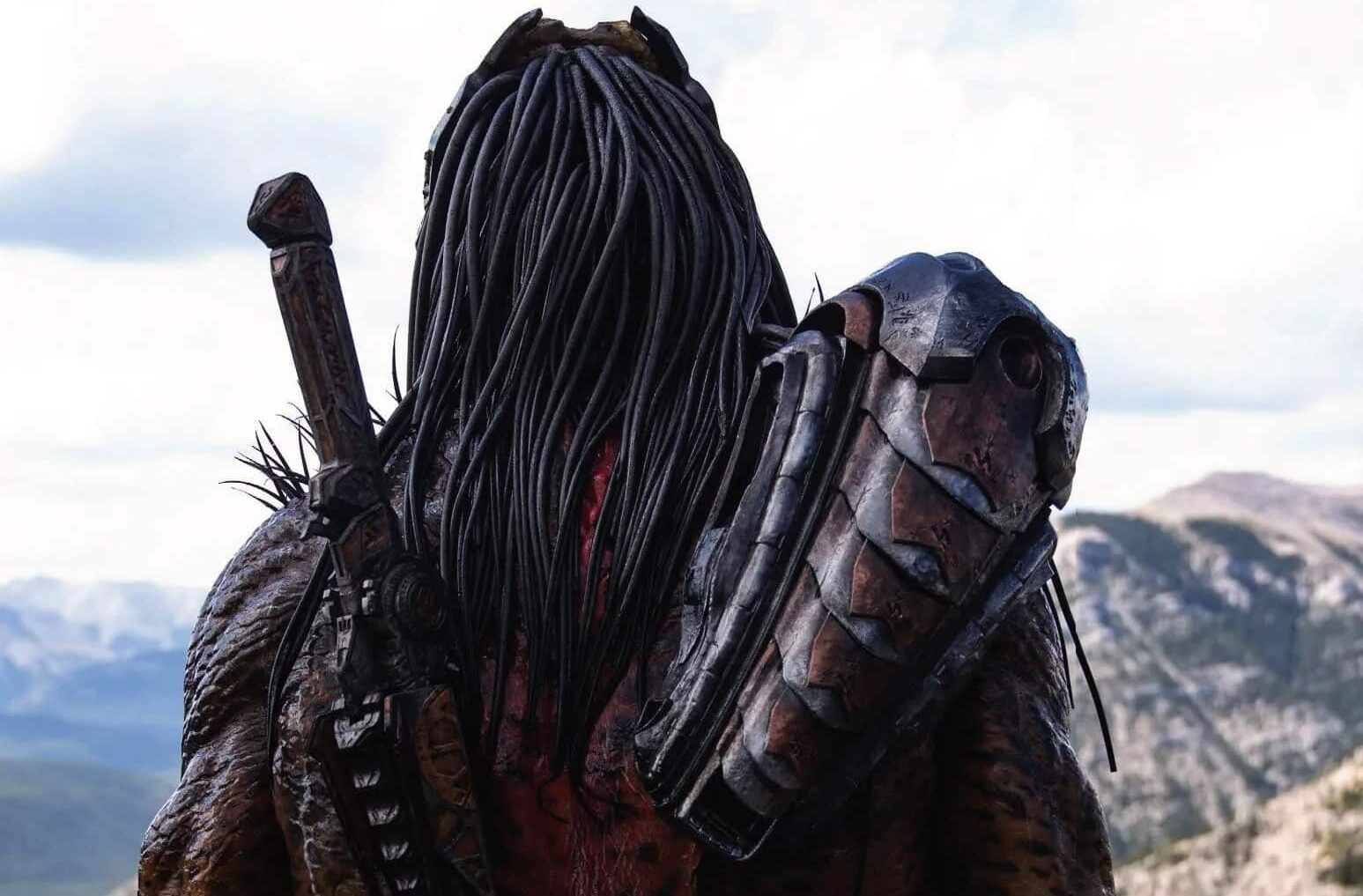 Prey is a film of reversals. Naru joins Taabe on the hunt for a mountain lion. As they approach the cat’s den, she warns, “The lion won’t think we’re hunting it here. It’ll think it’s hunting us.” After Naru is knocked out and used as bait by one of the European settlers, she does the same thing to him later on. “You bled my brother,” she states simply. “So now you bleed.” Even wounds are mirrored; one trapper is killed by a ricochet from the Predator, while the Predator dismembers one victim during an early attack only to be dismembered itself at the climax.

Central to Prey is the importance of standing up against imperialist aggression. Taabe turns a trophy skull on the Predator’s belt into an improvised weapon. Naru is undergoing the kühtaamia, a ritual in which she must hunt a creature strong enough to hunt her. “You think the reason for kühtaamia is to prove you can hunt,” Sumu (Stefany Mathias) warns Naru. “But there’s only one reason: to survive.” Taabe summarizes the importance of the ritual in setting boundaries, “When the lion comes, you tell that thing, ‘This is as far as you go. No more. This is it.’”

Prey belongs alongside recent westerns like The Hateful Eight and The Revenant in the way that it reframes the American frontier as a place of horrors rather than wonder. It seems appropriate that the climax of the movie finds the creature trapped in a literal quagmire, almost swallowed by the landscape. In extending the original’s postcolonial themes, and subtly shifting the emphasis within them, Trachtenberg and Aison provide Prey worthy of the original Predator.