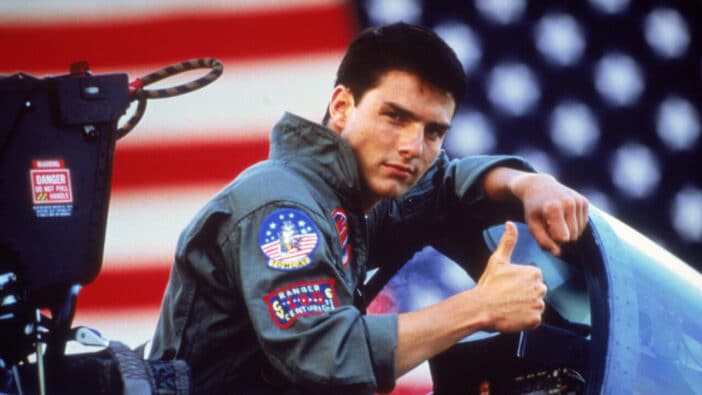 Critics weren’t exactly enthused by the aerial blockbuster. At The Los Angeles Times, Michael Wilmington summed up the movie as “exciting and disturbing, mind-boggling and vacuous.” At The Chicago Sun Times, Roger Ebert opined that “movies like Top Gun are hard to review because the good parts are so good and the bad parts are so relentless.” Naturally, these reviews had little impact on the film’s eventual success, becoming one of the landmarks of the Reagan era.

Top Gun was the highest grossing movie of 1986, by a considerable margin. It was also one of the most successful movies of the decade. The soundtrack would go on to become one of the bestselling albums of the year and the decade. The film led to a recruitment spike for the armed forces. It turned Tom Cruise, who was still recovering from the “expensive failure” of Legend, into a genuine movie star. It propelled Cruise to his status as “the last real movie star.”

Top Gun is a product of its time, which may explain why it took so long for the sequel to materialize despite the movie’s massive success. Towards the end of the decade, Cruise seemed sensitive to criticisms that the film was militaristic propaganda. There weren’t serious plans to develop a sequel until well into the millennium, and those were derailed by the tragic passing of director Tony Scott. So there is surprisingly little connective thread between Top Gun’s 1986 and Maverick’s present.

To watch Top Gun is to take a time machine back to 1986. The film offers an interesting snapshot of the contemporary American psyche, navigating the anxieties and the fantasies simmering away in the subconscious. Top Gun isn’t particularly compelling as a narrative feature. Its characters are drawn thinly. Its plot is driven by clichés. Even viewers who have never actually watched Top Gun will be able to sketch an outline of the film’s story from the opening scenes. 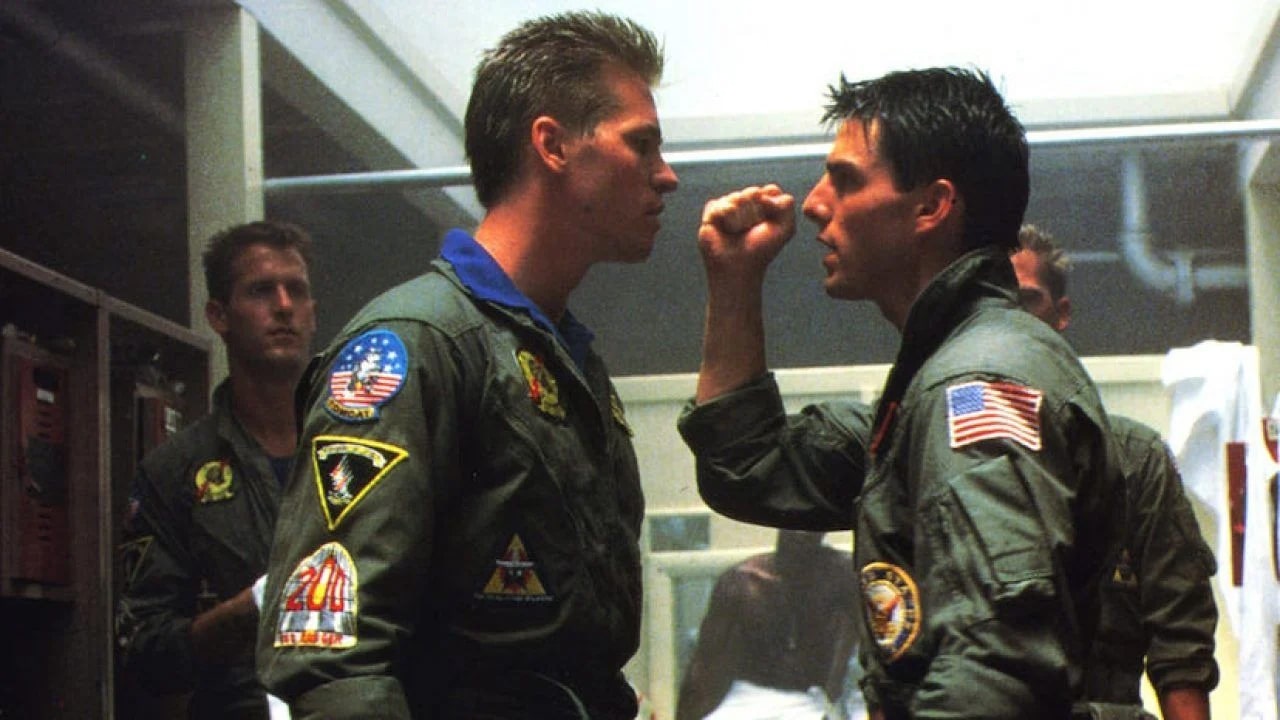 Top Gun is far from the best movie of the decade. It would be hard to argue that it is even the best blockbuster of a year that saw the release of Aliens, Star Trek IV: The Voyage Home, and Ferris Bueller’s Day Off. It is not even the best Tom Cruise movie of the year, outclassed by The Color of Money. However, none of these movies so perfectly encapsulate the mood of the world around them. If somebody were to boil the 1980s down to a two-hour film, it would look like Top Gun.

A large part of this comes down to the style of Tony Scott. Scott was often underappreciated and undervalued in his time, and he has only recently been rehabilitated as a “vulgar auteur.” Scott charts a throughline across three decades of American film, and to watch his blockbusters is to see America reflected back at itself in an increasingly fractured and fragmented mirror. One of the stock criticisms of Scott was that he was an “ad-man,” who began as a director of flashy car commercials.

In its own way, Top Gun is a commercial. It is selling something, even beyond its function as a military recruitment film. It is serving audiences a very particular version of Reagan’s America. With just a little distance and a little more historical context, it is easy to see why the film resonated as strongly as it did. Tony Scott was selling Americans an ideal, a fantasy that connected with a generation that was still working through the cultural traumas of the previous decades.

The 1970s were a turbulent time. America was rocked by scandals like Watergate, tragedies like the Vietnam War, and the horrors of extended recessions. Ronald Reagan, a movie star from the 1930s and 1940s, won the presidency in 1980. He won re-election in 1984 by reassuring voters that it was “morning in America.” The United States had suffered a crisis in confidence and needed to believe in itself again. It is no coincidence that the 1980s were defined by a nostalgic yearning for the 1950s. 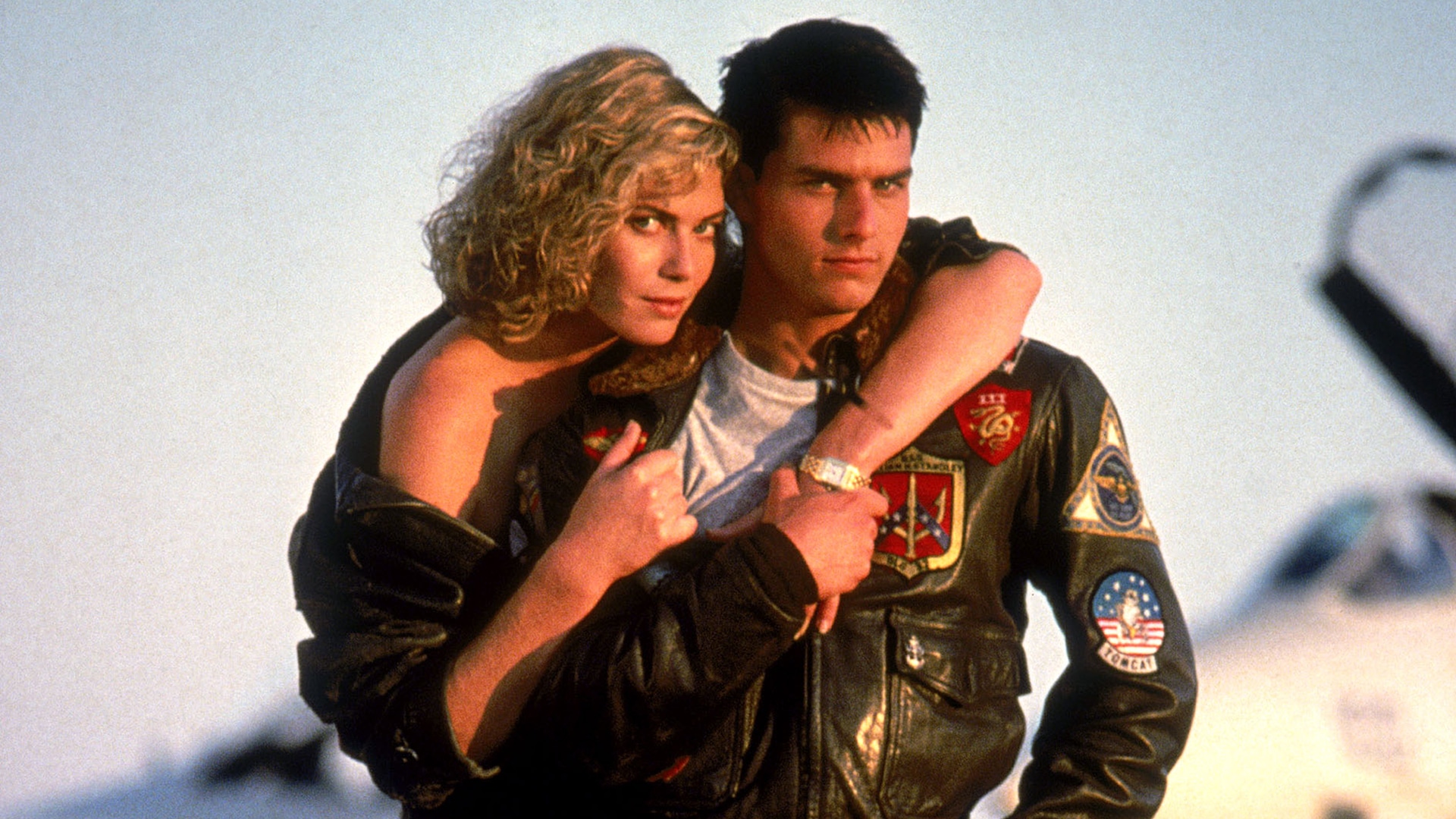 Many of the blockbusters of the 1980s, from Return of the Jedi to Rambo, were about replaying and reframing the cultural trauma of the Vietnam War, often by positioning all-American heroes as plucky guerrillas in thinly veiled restagings of the conflict. These sorts of narratives, which also featured in films like Red Dawn, Predator, and Die Hard, allowed American blockbusters to fold the iconography of the conflict into their narratives, restoring some sense of national pride.

Top Gun is particularly overt in its repurposing of the Vietnam War. The film explicitly explains that the eponymous flight school was formed by the United States Navy in response to the humiliation of the Vietnam War, where American fighter pilots suffered heavier losses than they had during the Korean War. The entire military program is part of a national effort to restore some sense of pride in the military machine, to prevent such humiliations from happening again.

Vietnam casts a more direct shadow over the film’s narrative. Maverick (Cruise) is haunted by the death of his father, Duke. Duke crossed over into Chinese airspace and was shot down. The particulars of that death are kept classified, presented as a source of shame for Maverick. This shame eats away at Maverick, until Commander Mike Metcalf (Tom Skerritt) reveals that he served with Duke and that his father died as a hero. This is essential to restoring Maverick’s self-image.

Top Gun was released the same year as Platoon, a highly personal account of the Vietnam War based directly on the experiences of writer and director Oliver Stone. Platoon was praised for bringing those first-person experiences of the war to screen and often positioned as “the flip side” to the “video arcade-ish” aesthetic of Top Gun. Cruise would later earn his first Oscar nomination working on Born on the Fourth of July with Stone, with even Stone alluding to Top Gun in the press. 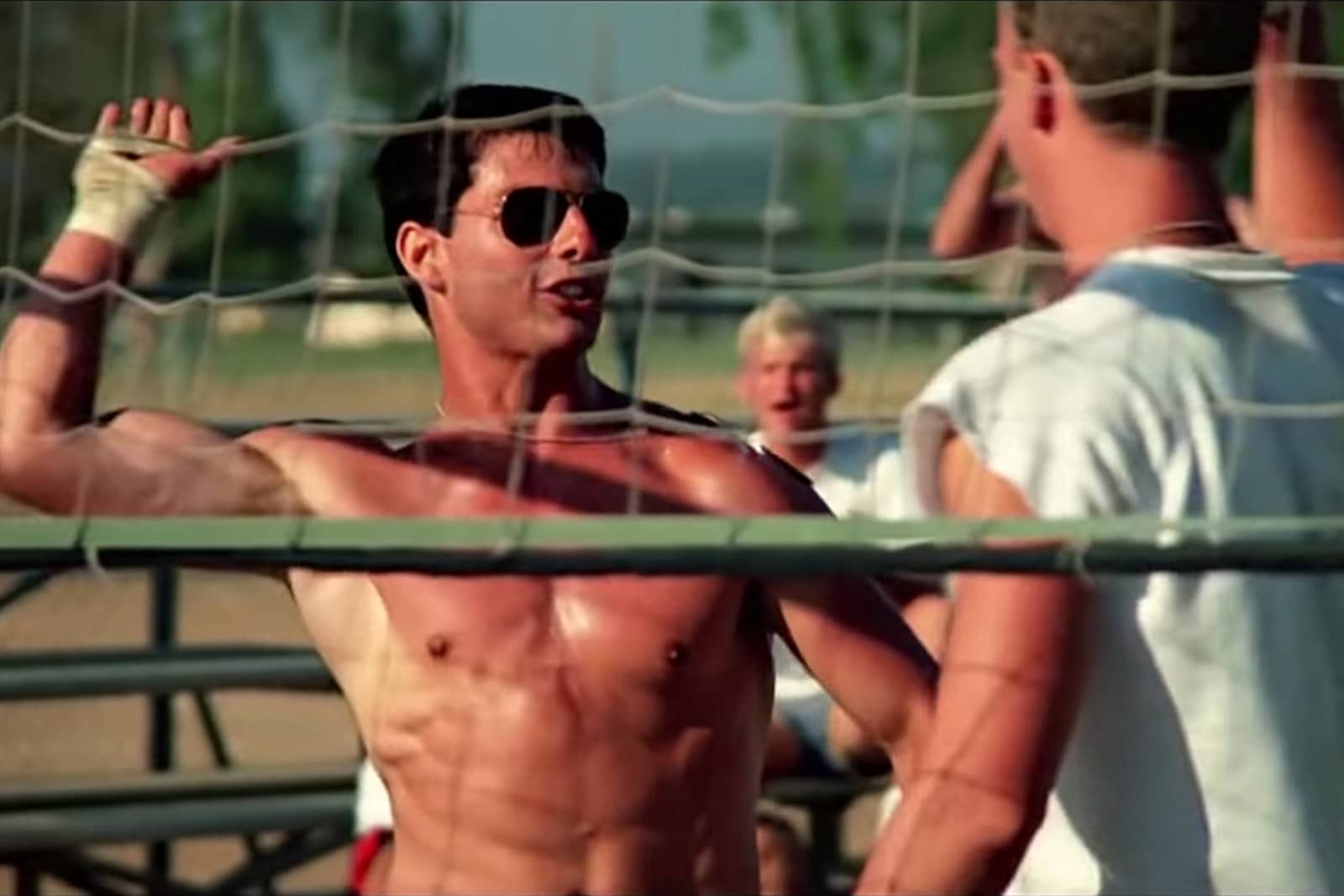 If Platoon offered the reality of war as it was, Top Gun offered the fantasy of war as one might wish that it was. Tony Scott shoots Top Gun in the shades of blue and orange that define so many of his films from the era, long before the color scheme became an advertising cliché. The result is that Top Gun feels like a trance. Cinematographer Jeffrey L. Kimball shoots the film in a perpetual twilight, as if to reassure audiences that it is morning in America. The synth score enhances this ethereal quality.

Many modern viewers are primarily familiar with Top Gun through Quentin Tarantino’s very Tarantino interpretation of the film as Maverick coming to terms with his own latent homosexuality. Scott shoots the male body as a fetish object, particularly during the movie’s infamous beach volleyball game. As with contemporary action stars like Sylvester Stallone or Arnold Schwarzenegger, these glistening “hard bodies” offer a reassuring ideal of American masculinity and virility after a turbulent decade.

This gets at the real heart of Top Gun. After all, the movie was released towards the end of the Cold War. Several events in 1986 marked a sharp de-escalation of tensions between America and Russia, including the Chernobyl disaster and the Reykjavik Summit. Although originally intended to be North Korea, the finished cut of the film never even identifies the enemy that the pilots find themselves facing down in the third act. Then again, it doesn’t matter. The opponent is not an external force.

True to the spirit of the 1980s, the real enemy is self-doubt and introspection. “You don’t have time to think up there,” Maverick explains. “If you think, you’re dead.” Indeed, Maverick’s real enemy is his own insecurity. Maverick thinks too much. He feels too much responsibility. Around the midpoint of the film, Maverick’s friend and co-pilot Goose (Anthony Edwards) is killed during a freak accident while ejecting. Maverick’s self-confidence is shaken by Goose’s death. He begins to lose his edge. 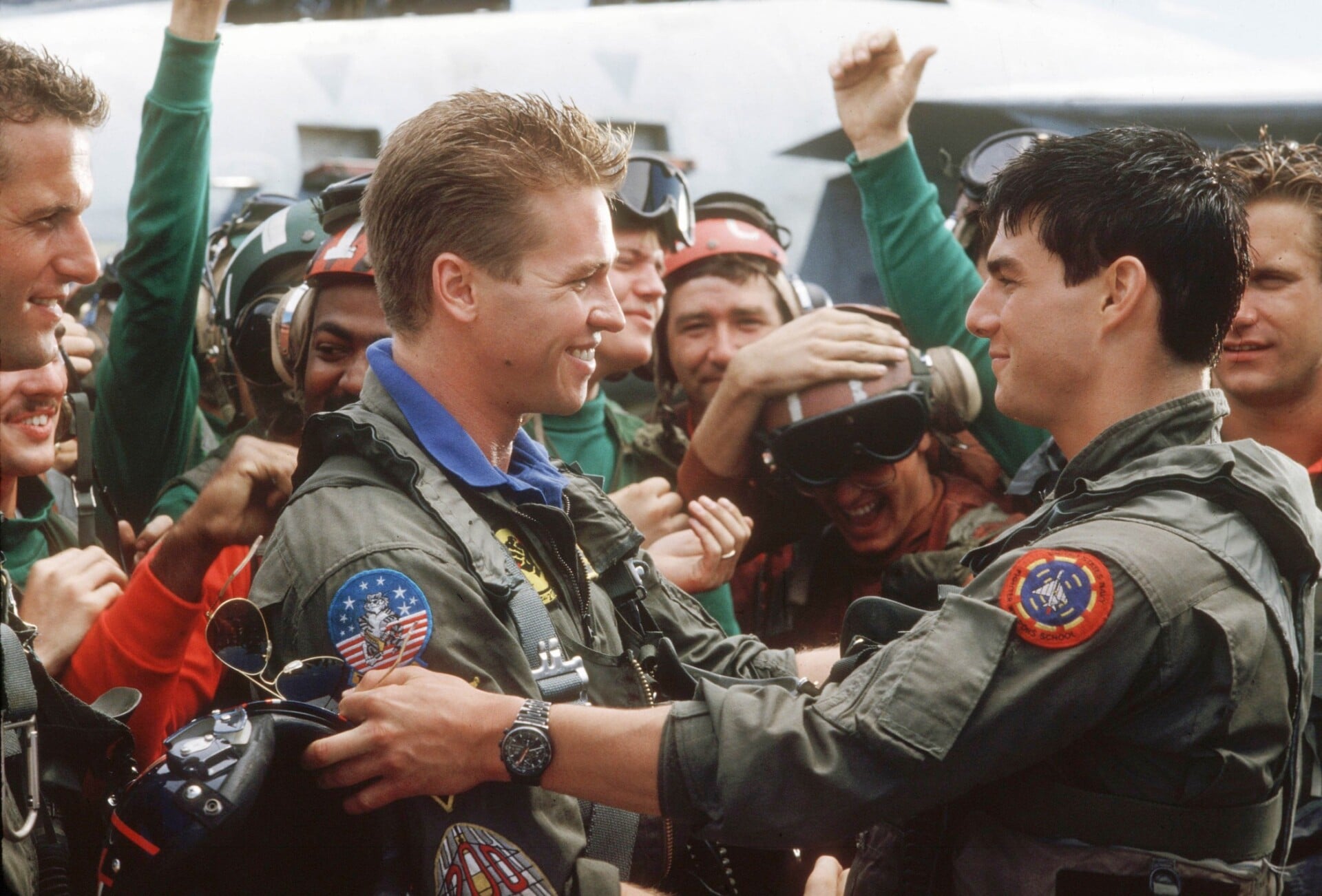 What’s really interesting about Top Gun is that there is really no external antagonist. Maverick is explicitly cleared of any wrongdoing by a military tribunal. Metcalf keeps him around even as his performance deteriorates. Goose’s widow Carole (Meg Ryan) urges Maverick to get back in the cockpit. “God, he loved flying with you, Maverick,” she urges. “But he’d have flown anyway without you.” Even Maverick’s rival, Iceman (Val Kilmer), tries to reassure the pilot in his own way.

In the context of a movie that is so overtly about dealing with the fallout and trauma of the Vietnam War, Top Gun is explicit. Like Maverick, America needs to simply get over any lingering insecurity or responsibility it feels for that tragedy. In doing so, Top Gun becomes one of the most individualist movies of a decade defined by individualism. Maverick needs to rid himself of any sense of responsibility to others to become his best self.

At the end of the movie, he unburdens himself of guilt over Goose by throwing Goose’s dog tags into the ocean. It is a moment of triumph. Maverick is finally free. Much like the movie’s perpetual golden skies suggest a new dawn for America, Tony Scott’s use of his trademark reflective aviator sunglasses plays into this theme. If eyes are the window to the soul, then maybe it’s best to keep them hidden behind a darkened mirror, lest one feel the urge to look inwards.

It makes sense that Cruise would become one of the defining stars of the decade. He broke out in Risky Business, in which he played a young student who similarly needed to overcome his self-doubt and insecurity, leading to a reshot ending in which he would fully embrace the era’s capitalist philosophy. Comedian Rich Hall would point out that Cruise spent the better part of the decade playing out these “crisis of confidence” arcs, but never more effectively than in Top Gun.

In his review of the film for The New York Times, Walter Goodman compared Top Gun to earlier fighter pilot movies like Wings, complaining that the earlier film portrayed “the human beings as more vulnerable and more at one with their rather fragile-looking machines.” Goodman is not wrong. Top Gun is a movie that aggressively rejects even the possibility of vulnerability and interiority. That’s what makes it such a perfect encapsulation of the decade.