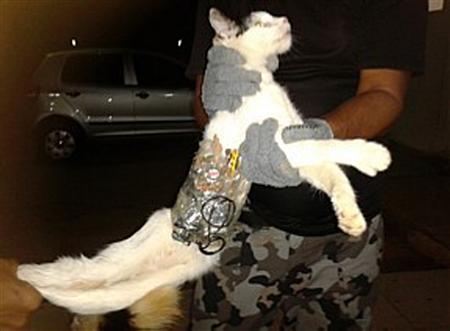 A cat taped to a saw and cell phone marks an all-time high for prisoner ingenuity and an all-time low for kitties everywhere.

Face it cats, you’re good at a lot of things-purring, sleeping, haughtiness, and even keyboards-but deftly breaking hardened criminals out of Brazilian prisons without getting apprehended in the process? Sorry my little feline friends, but I’m afraid not. One such South American cat recently learned that sad truth the hard way when arrested for attempting to smuggle a saw and cell phone past the gates of an Arapiraca prison by innocuously carrying them on its back with tape.

Yes, an ordinary white house cat was found nonchalantly walking toward the cell block taped to not only a saw and cell phone, but also multiple drills, some batteries, a memory card, an earphone and, of course, a wall charger for the aforementioned cell phone.

Currently, all 263 prisoners of Arapiraca are considered suspects in the case, though progress toward nabbing the purrpetrator has been slow. “It’s tough to find out who’s responsible for the action,” explained a prison spokesperson soon after detaining the fluffy smuggler, “as the cat doesn’t speak.”

While there is zero scientific evidence ruling out the cat itself as the mastermind behind Operation Tape Saw, the prison guards saw fit to pamper it anyway, quickly sending it to an animal disease center for medical treatment.