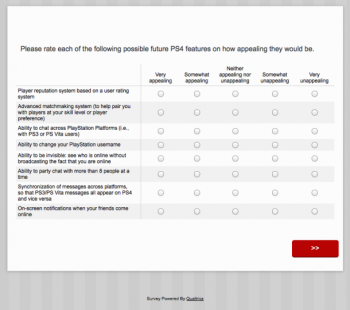 One of the most requested PSN features — changing a user’s PSN ID — might be coming soon to PS4, as well as other ideas in a survey sent by Sony to PS4 gamers.

Possibly one of the most requested PlayStation Network features might be coming soon to the PlayStation 4, and that’s allowing users to change their PSN online names. Sony has sent out a survey to PS4 owners that ask a multitude of questions regarding the PS4 and PSN, which suggests some of the items listed might be making its way onto a future firmware update. Aside from changing online usernames, possibly the most interesting ones listed include a “Player reputation system based on a user rating system,” an “Advanced matchmaking” system that will help match players against users on their skill level, ability to turn invisible, and allowing more than eight people to engage in party chat simultaneously.

Bear in mind, though, this isn’t confirmation that the features listed in the survey will make its way to the PS4 or PSN. It’s just that Sony is looking into whether there’s user interest and what they prioritize more. But seeing how frequent we get system updates for consoles, I wouldn’t be surprised if all the items listed makes its way to the PS4 before the year’s done.

If I had to hazard an assumption, allowing PS4 players to change their usernames will involve a fee of some sort. Otherwise, users would keep on changing their PSN usernames haphazardly if not. Hopefully, whatever fee Sony thinks up, it won’t be much, since a lot of users have been requesting for this feature to make its way to the PSN since the online infrastructure’s inception.

What feature in the survey would you want to make its way to the PSN first? And what can a player reputation system bring to the table for PS4 gamers — or do you see it being the same as its Xbox One counterpart where users with bad reps will lose certain privileges?