I previewed Push Me Pull You game at PAX East this year, but the developer was kind enough to share a code with me so that I could test out more of the game’s areas and features outside of the rush of the convention. I was somewhat worried that the novelty would have worn off – was this a game I genuinely enjoyed, or did the setting and spontaneity impact my fondness for it? As it turns out, I enjoyed it even more at home. 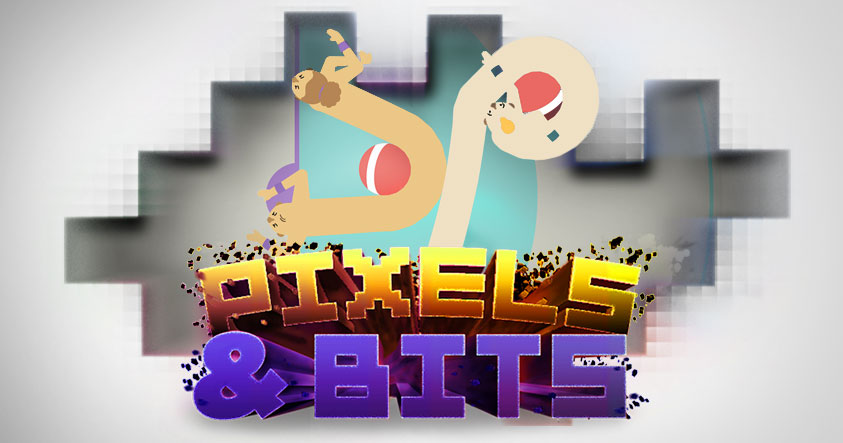 Push Me Pull You is the type of game that, when discussing in without pictures, sounds horrifying. You find yourself in a universe where people are joined together at the waist, writhing about like a combination of chinese finger traps and uncooked sentient sausage. Yet the creepy and disturbing premise is offset by bright colors and overly cute designs. It’s disgusting and playful, nightmarish and weirdly endearing. I found myself, more than once, accidentally wondering about things like “How do they use the restroom? Gross” and “I wonder how reproduction works? Gross.” My best advice is to not spend too much time pondering the lifestyles of these characters, because every question has a potentially horrifying answer.

While you can play 2-player, the best way to experience PMPY is with four. It’s uncomfortable to share a gamepad with another player, sure, but it’s also pretty awesome how the developers were able to translate the aspect of in-game connection to the actual controls. It’s also a shining example of true co-op gameplay – two people controlling one body with one gamepad.

After customizing your character – there’s a decent selection of hair colors and styles and skin colors – you can make your way to the match. Each player has the ability to grow and shrink their character. While you can cover more area when your character is extended, the center of your body is also the weakest point. There’s a surprising amount of strategy to determining how much length is the perfect amount, at that exact moment, for what you need to do. The goal is simple – navigate around the arena, gain possession of the ball, and keep in on your side for as long as possible. The floor will begin to fill with your team’s color, and once it fills in you win.

The game’s other variants stick to the same formula while adding new challenges. Perhaps you’ll have three balls to handle instead of one. Maybe you have to drag the ball to different areas in order to score. Or perhaps you’d like to play a more brutal take, trying to attack the other team’s ball while keeping yours safe. No matter the mode you choose, the best part is playing with others.

One of the best parts about PMPY is that I felt comfortable playing it with my children. We don’t have many games in our collection that equally amuse the entire family, and yet from youngest to oldest, we spent the majority of Mother’s Day this year cracking up and yelling at the screen while we tried to cooperatively control our virtual wormy bodies in an effort to grab a soccer ball and emerge victorious. It’s also an extremely approachable game. The controls are simple to learn, and the controller sharing allowed me to help my 7-year-old teammate when she got caught up. It’s uncomplicated but frantic, and never confusing despite all of the, well, confusing, things happening on the screen. Most surprising, from youngest to oldest, we all enjoyed the hell out of it.

Push Me Pull You isn’t the type of game I’m likely to spend much uninterrupted time on. However, I can easily see myself, and my family, returning to it in between life (and other games) regularly. The laugh-too-loud, yell-at-the-screen-over-every-win-and-loss is something that we can absolutely bond over, and I’m thrilled to have this in our collection.