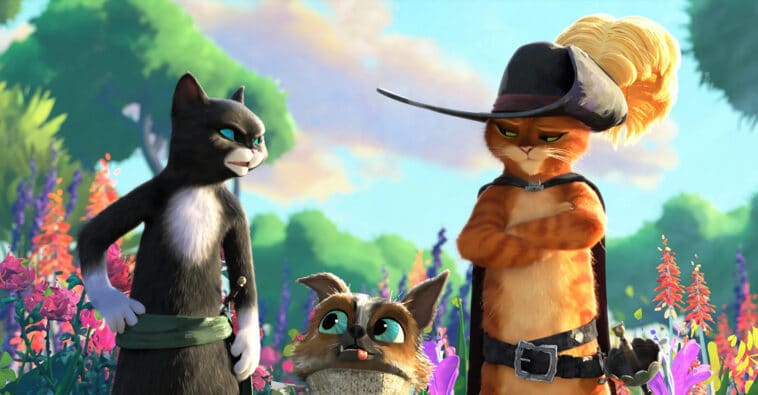 Universal Pictures has revealed the trailer for Puss in Boots: The Last Wish, an intensely belated sequel to the 2011 movie Puss in Boots, which was in turn a spin-off of the Shrek franchise. The movie suffered several delays and perhaps some rewrites in getting to this point, but Antonio Banderas is returning to voice suave cat musketeer Puss in Boots. Salma Hayek is also returning as the cool Kitty Softpaws. As for the movie itself though? Yeah, it’s about death.

Puss in Boots: The Last Wish makes Puss reflect on his mortality. The setup of the movie is that he is a cat, and cats have nine lives — but Puss has died eight times now. Kitty Softpaws tries to convince him that the fact that life is finite makes it more fulfilling. However, it sounds like Puss might even be able to weasel his way out of death itself. According to Universal, he is apparently going on a quest in this movie to get his lost lives back. Maybe Puss has to discover an island of 1-Up Mushrooms.

Kitty Softpaws and a dog fittingly named Perro (Harvey Guillén) will help Puss in his quest. Along the way, they will evade dangers from the likes of Goldilocks (Florence Pugh) and the Three Bears Crime Family, “Big” Jack Horner (John Mulaney), and the Big Bad Wolf (Wagner Moura). Joel Crawford is directing the film, and Mark Swift is the producer. The executive producer is Illumination CEO Chris Meledandri, who is also working on the Super Mario movie.

Puss in Boots: The Last Wish arrives in theaters on September 23, 2022.