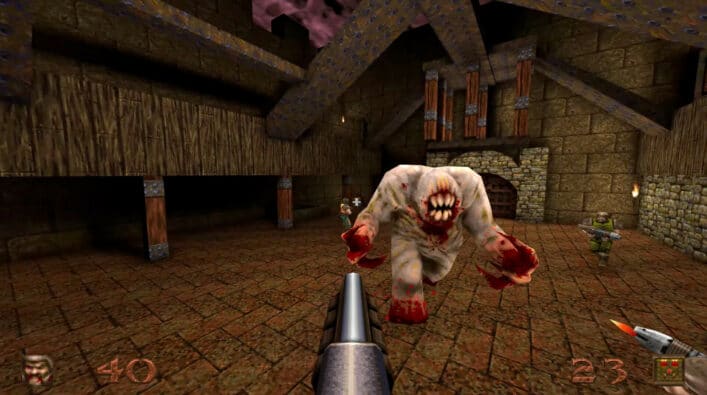 As announced at QuakeCon 2021, the original, FPS genre-defining Quake has received a full remaster available today for PC via Steam and Microsoft, PlayStation 4, Xbox One, and Nintendo Switch, bringing new DLC to play, too. Alongside the addition of online and local co-op support, cross-play multiplayer, up to 4K visuals, and both original Quake expansion DLCs, Wolfenstein developer MachineGames has also contributed the Dimension of the Past expansion and also a brand new expansion, Dimension of the Machine.

This remastered version of Quake costs $9.99 and is available to purchase digitally on PC, Switch, PlayStation, and Xbox platforms now, though those on PC who already own the original can upgrade for free. They will be released physically later on Nintendo Switch and PlayStation 4 as well through Limited Run Games. Quake is additionally available now on Xbox Game Pass. Plus, Quake II and Quake III: Arena are also available for Xbox Game Pass subscribers on PC, though these games come without any enhancements.

Microsoft has added that Xbox Series X | S owners will be able to take advantage of next-gen optimizations at a later date, adding native 4K resolution and 120hz refresh rates. Sony also revealed that a similar upgrade will add DualSense support and enhanced visuals to the PlayStation 5 version in the future. Meanwhile, Nintendo Switch owners can play Quake in upward of 1080p, but it supports gyroscopic aiming controls. You can relive the nostalgic torment of the original FPS on each platform now, and here’s the Quake remaster trailer.

Quake originally released in 1996 as another one of id Software’s FPS classics. Going on to see a few sequels into the mid-2000s, the series is celebrating its 25th anniversary this year.