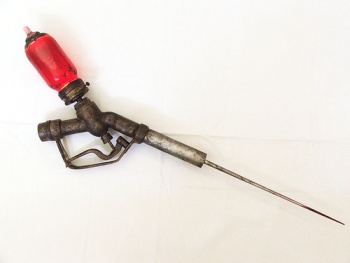 Remember the guy who made that absurdly realistic Portal gun way back when? This time around he’s taken it on himself to build a Little Sister’s ADAM syringe from BioShock, and it’s just as amazingly close to the object in the game.

Harrison Krix, a prop designer from Atlanta, once made a replica Portal gun for his girlfriend. As it turns out, Krix doesn’t just do this stuff to make his ladyfriend happy, he gets a real kick out of making in-game objects into real-life replicas. For his latest trick, he decided to build an ADAM syringe, those creepy devices the Little Sisters in BioShock would use to harvest (and then drink) precious ADAM out of dead bodies.

Krix started with the pump and handle of the syringe, which he noted was modeled in the game after 1920’s era gasoline pumps. Guess there are a lot of old-timey gasoline scraps lying around Atlanta, because Krix found his own pump, circa 1926, to use in his project. After that, he found a glass container to hold his “ADAM,” added a cap to the end of the handle, and then stuck on the needle, which he built from a foot-long piece of PVC.

“The end is chamfered like a real syringe would be, although one this size is a little disturbing,” Krix described. “It’s alarmingly sharp.”

From there, he built some LED lights into the ADAM chamber to give his ADAM (which he made with red dye, hairgel and water) that freshly-harvested-from-human-flesh glow. For the piece de resistance, he attached a baby bottle nipple to the ADAM chamber, so you can pretend to drink the ADAM just like a Little Sister would. After that, it was just a matter of adding weathering effects to make the thing look like it’d been around the block of a failed underwater utopia.

Krix takes commissions, so if you really, really want one of these, you can get in touch with him here. I doubt this’ll be as popular as the Portal gun, which he says he’s already made four more of, but I’m sure there are some freaks out there who are really into needles.