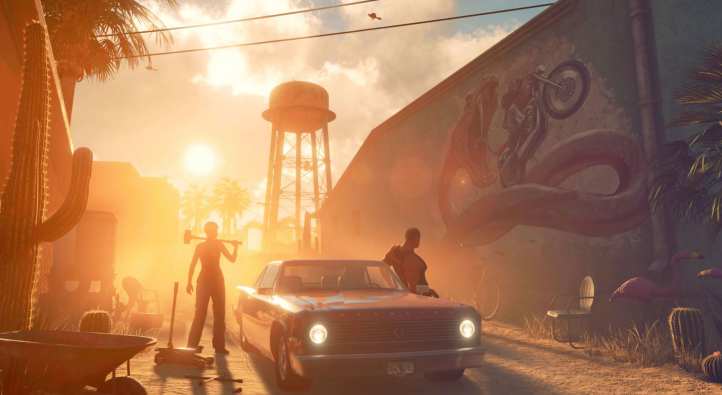 Deep Silver and Volition have published a seven-minute Saints Row “Welcome to Santo Ileso” trailer, which shares more details and gameplay from the reboot. Lead actor Bryce Charles hosts the video from the American Southwest, where the game’s setting is based, giving fans a rundown of how this new game marks the beginning of the series’s new future. As shown in the gameplay, many of Saints Row’s key components remain, even if there are slight changes keeping the moment-to-moment action fresh.

“Naturally, we looked at all the things we’ve done in the past,” Volition creative director Brian Traficante of the studio’s approach. “The more we did that, the more we started to discover that we’re blocking ourselves from the massive creativity we have at the studio.”

This thought process led Volition to create this new Saints Row as a reboot. From there, the studio adopted the saying, “Keep it strange,” a motto that fits both the franchise and Santo Ileso. Each of the game’s four protagonists say it too, with the studio describing this Saints Row’s Boss as a “charismatic murder machine.” Then there is Eli, Mina, and Kevin, who each bring their own relatable personalities to the cast. Though, it sounds like Kevin just likes being a shirtless chef.

Rivaling the player character’s group in Saints Row is the game’s different factions: the Marshalls, the Panteros, and the Idols. Marshalls are an international organization with the funds to come at the Boss with high-tech weaponry, while the Panteros do battle with heavy weapons and melee attacks. The Idols are a group of fashionable, digital helmet-wearing anarchists that will swarm the playing field when they show up.

In this Wild West playground of Santo Ileso, Saints Row offers the freedom to run your gang however you see fit. This means Volition is striving to maintain a self-made philosophy that gives players lots of customization choices and options when it comes to bringing in money for a criminal empire.

Deep Silver and Volition formally announced the Saints Row reboot during this week’s Gamescom Opening Night Live as a new take on the comedic open-world crime franchise. It’s set to launch on PC via the Epic Games Store, PlayStation 4, PlayStation 5, Xbox One, and Xbox Series X | S on February 25, 2022. Until then, you can watch the Saints Row “Welcome to Santo Ileso” trailer below.